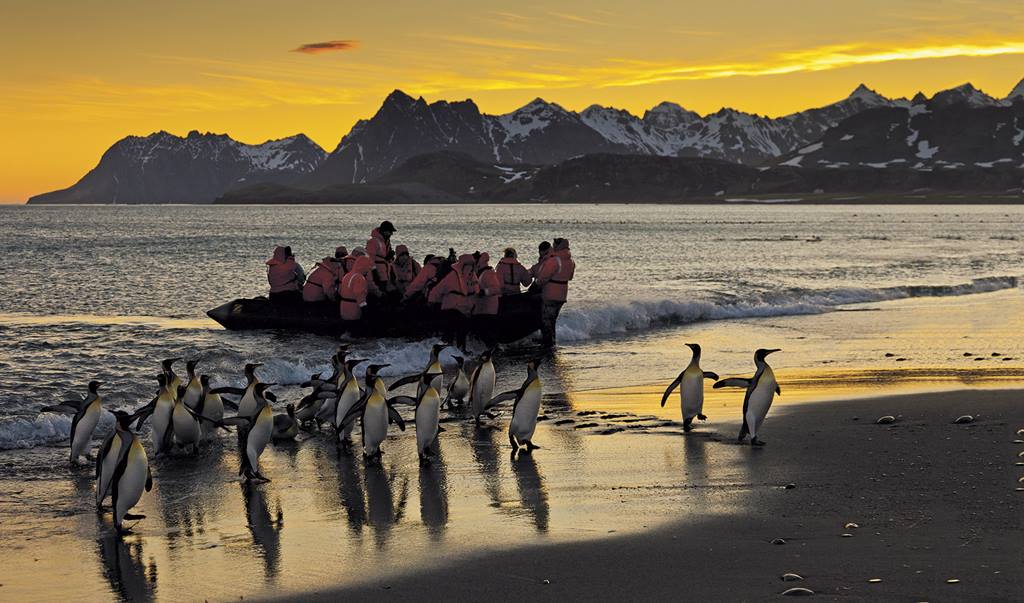 Encounter amazing wildlife in the furthest reaches of Planet Earth

Antarctica, a vast, white land at the very edge of the Earth, is seen as the final frontier in many ways.

With large stretches of uncovered, unexplored wilderness and terrain, the planet’s southernmost continent has been travelled across by history’s great mavericks and courageous explorers, such as Ernest Shackleton and Sir Edmund Hillary, who once traversed the region decades ago, so we could enjoy it today.

Still magical and largely untouched, an expedition to Antarctica is a once-in-a-lifetime experience.

One of the main reasons people are drawn to this faraway land, is its diverse and beautiful wildlife. With this in mind, we’ve put together this wildlife guide for those considering embarking on a luxury Antarctic cruise of a lifetime.

Where do penguins live?

We couldn’t produce an Antarctica wildlife guide without mentioning penguins. Undoubtedly, one of the main reasons people visit Antarctica, is to encounter penguins, simply because they are fascinating creatures. In fact, a lot of travelers only know one thing at the start of their polar researching journey, and that’s: "I want to see Penguins!"

Antarctica isn’t just home to one type of penguin either, with multiple subspecies calling the continent home. Visitors are likely to encounter a wide variety of waddling penguins.

So how will you know which species you’re looking out for? How will you know your Gentoo penguins from your Chinstrap penguins? And if it’s an Adélie penguin, would you know? Fear not, we can explain how to identify the different varieties of the extremely lovable, black and white creatures.

Firstly, the Gentoo penguin can be identified from its bright orange and red bill, as well as the white patches above their eyes that make them stand out in a crowd of the typical ‘tuxedo-look’ black and white penguins.

Next up is the Chinstrap penguin, which is marked by its distinguished narrow black band that decorates the underside of its neck, hence the name, ‘Chinstrap’. Chinstrap penguins are also black and white in appearance and are devoid of the bright orange markings that the Gentoo is known for.

A third type of penguin you could encounter in the Antarctic, is the Adélie penguin. The Adélie penguin is a mid-sized variation of the species, with distinctive marks, such as the subtle white ring that surrounds the eye and the elongated feathers that adorn the back of their heads.

Keep an eye out for these amazing creatures on your Scenic Eclipse Antarctica cruise! 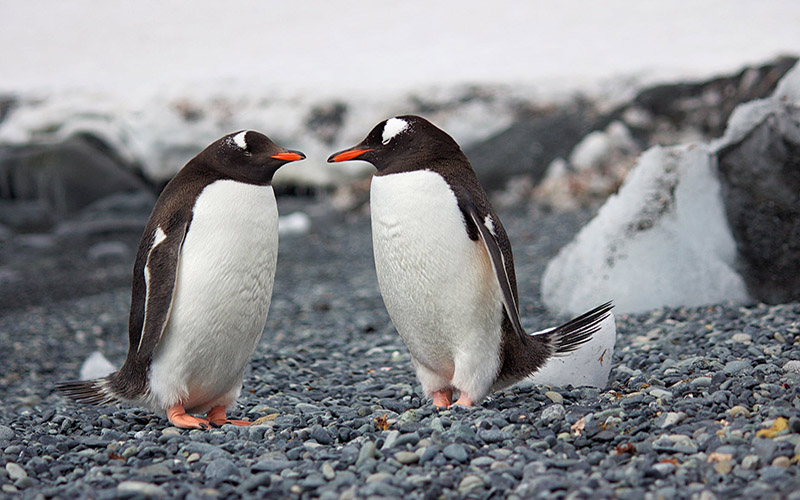 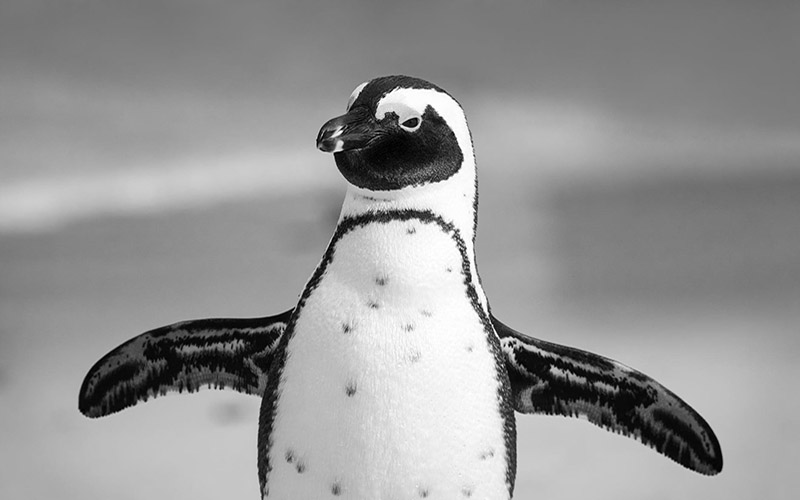 With plenty of marine life around for you to see in the Antarctic, penguins are far from the only creatures you’ll be able to discover there, so pack your camera, be patient, and more importantly – keep a look out for the wonderful sea life that graces this breath-taking part of the world.

Head towards the deep, icy blue in this region of the world, and you’ll find blue whales gently drifting along the surface of the ocean, and humpback whales dramatically leaping out of the ocean. Or perhaps you’ll be so lucky as to witness the stark contrast of the Orca’s black and white body as it passes through the ocean and breaks the surface.

If you miss out on the giant, sea-dwelling whales, don’t worry, as there are plenty of other sub-aquatic and amphibious animals to marvel at. You may be lucky enough to watch the earless elephant seals gather on the rocks in their ritualistic, communal fashion. Or perhaps you'll spot the leopard seal, with its muscular, lean physique and agile movement.

The bottom line is this: don’t discount the marine life when it comes to Antarctica.  Cold water doesn’t mean the waters are not habitable or friendly! 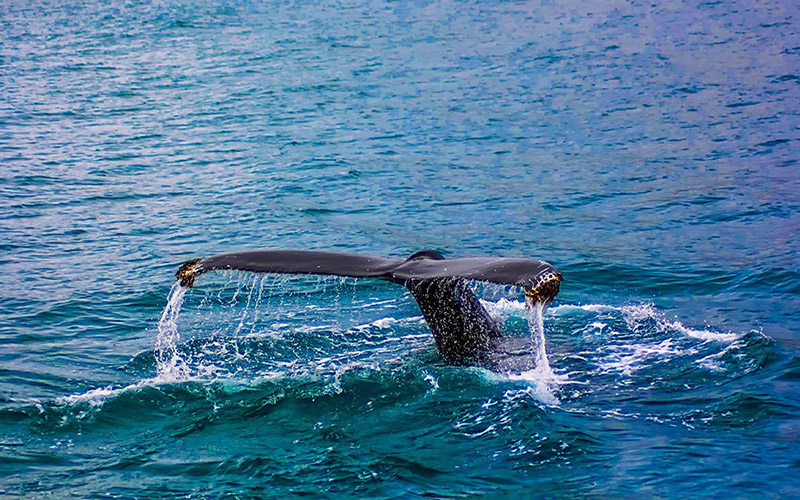 The best seasons to encounter wildlife in Antarctica

Navigating the wildlife in Antarctica isn’t a one-size-fits-all situation, depending on what time of the year you choose to visit.

From the prime courting season of Spring, through to Autumn’s beautiful sunsets and whale sightings, when you set sail to Antarctica will largely determine what wildlife you can expect to see.

In the Spring months, which lie between November and December, travelers to Antarctica will experience the continent in its most pristine state. The start of the season marks an opportunity to enjoy relatively mild temperatures of between 23 and 41 degrees Fahrenheit. For wildlife lovers, this is prime courting season for penguins and birds.

When the season starts to turn to Summer, the wildlife leaps into full bloom. Taking advantage of over twenty hours of glorious, Antarctic sunshine, there’s a seemingly endless supply of daylight for the new-born penguin chicks to hatch in.

The Antarctic Autumn brings with it its own unique environment and elements. If natural scenery and phenomena set you alight, then you’ll be infatuated with the sunrises and sunsets that make this time of the year unrivalled for sky views. Beyond the skies, if you look towards the sea, you’ll notice a thin sheet of ice that creates a unique, almost patterned look across the water.

Additionally, it is this time of the year that the penguin chicks molt, which brings out their playful, fun-to-watch personalities – this shouldn’t be missed!

What you should know about the Drake Shake

The Drake Shake is a unique part of the Antarctic experience. Although you’ll be safe on the tranquil, gentle glide of Scenic Eclipse, as the 6-star discovery yacht makes its way towards Antarctica, the Drake Shake is a natural, elemental phenomenon that makes the journey to the region unique.

Often described as a rite of passage, the rough seas along Drake’s Passage – the body of water that sits between Cape Horn and the Antarctic’s South Shetland Islands, is characteristically choppy, and from within the safety of Scenic Eclipse, is a fun ride which many look forward to as they enter the final frontier of Antarctica.

On board Scenic Eclipse, our 200-guest, 6-star luxury Discovery Yacht, you’ll have a choice of many different destinations to visit in and around the Antarctic region. Take South Georgia, for example, which includes as much biodiversity as the Galápagos Island. Or the Falkland Islands, which feature a broad, exciting selection of albatross, seals and penguins. Wherever you decide to visit on your Antarctic Ocean cruise, browse our itineraries below to find your perfect match.

Save $5,404 per couple with our Super Early Bird fare.

Save $4,212 per couple with our Super Early Bird fare.

Save $6,676 per couple with our Super Early Bird fare.

Save $7,968 per couple with our Super Early Bird fare.

Save $8,620 per couple with our Super Early Bird fare.

Save $8,580 per couple with our Super Early Bird fare.

Save $4,212 per couple with our Super Early Bird fare.