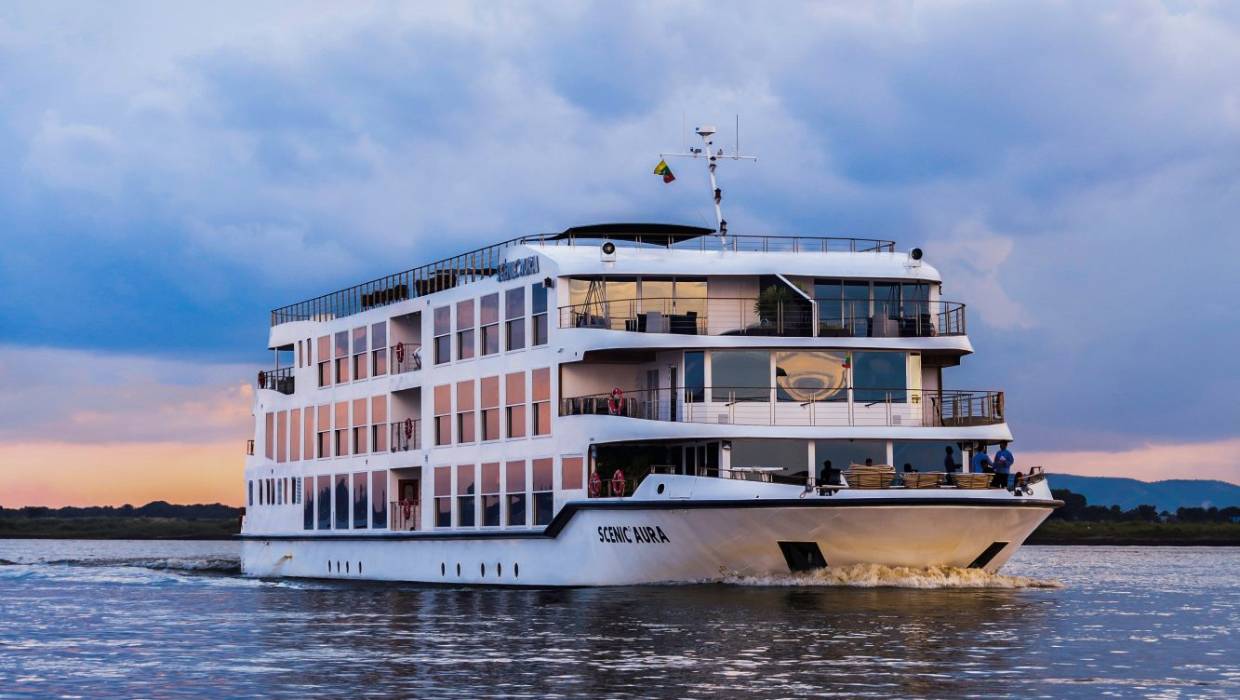 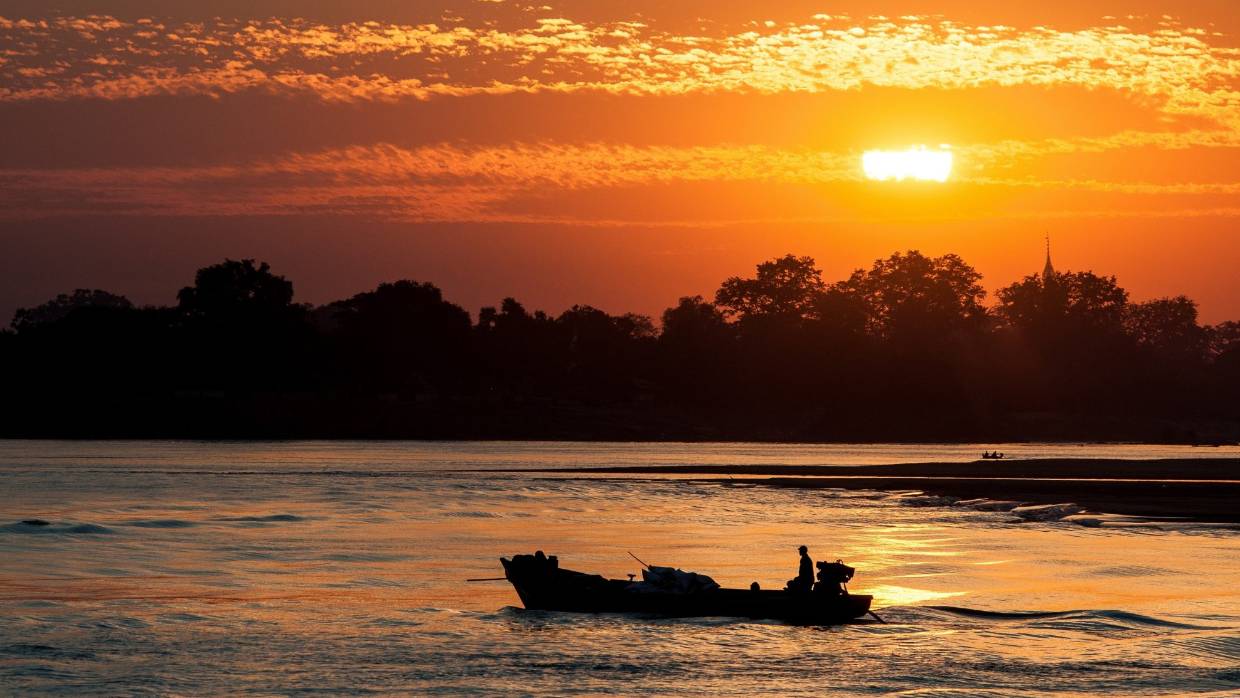 Sunset on the Irrawaddy River.

Cruising this languid river is like stepping back to colonial days, when what was then known as Burma entered the collective imagination as an exotic British outpost rich with gold, jade and teak, exemplified by Rudyard Kipling's description of "the sunshine an' the palm trees an' the tinkly temple bells".

Today, Kipling's "road to Mandalay" is still the main thoroughfare through the Myanmar countryside, a meandering and strangely intoxicating sepia snapshot of a land forgotten by time.

In its sandy shallows, women pound their washing, splashed by naked children dive-bombing and laughing; nearby the menfolk fish from the shore or cast nets from rickety long-tail boats.

Beyond banyan trees clinging to eroded cliffs with desperate tendrils lie simple villages, many of them still without electricity or basic services, while every hill boasts a gold-leaf pagoda, described by Somerset Maugham as "huge, remote and mysterious, like the vague recollections of a fantastic dream". 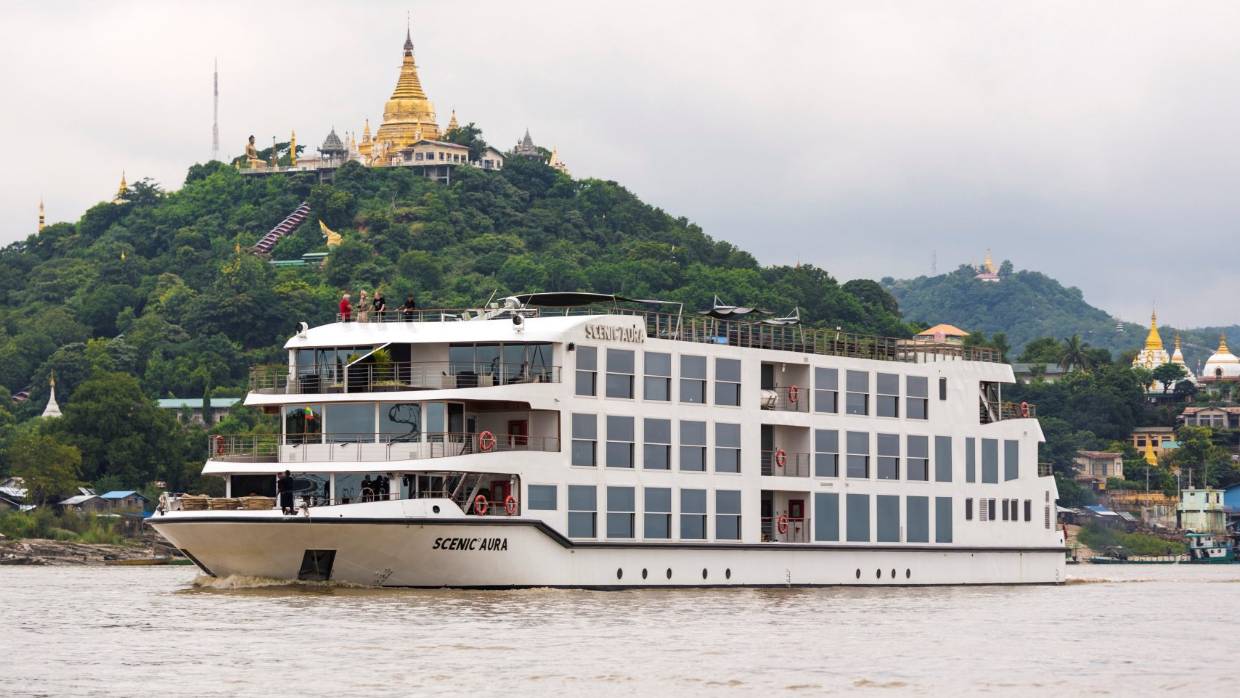 Scenic Aura was launched in September 2016.

Scenic's 14-day Mystical Irrawaddy tour begins with a land component in the former colonial capital of Yangon, with passengers visiting the dreamiest of all Myanmar's temples, the gold-plated, diamond-encrusted Shwedagon Pagoda, which contains no fewer than four relics of the Buddha.

Yangon itself is a surprisingly green city with a ban on motorcycle traffic; but beyond the city limits, typical south-east Asian road chaos ensues, with the seven-hour coach journey to Pyay, where we will board the Scenic Aura, quite the heart-stopping adventure.

There are no jetties of any note along the Irrawaddy; Aura is instead tethered by ropes to trees on the river bank, and accessed by a gangplank after a steep, sandy descent. Everyone is excited to finally be on board our luxurious floating palace; but even after a welcome reception, we don't set sail until the following morning, with night travel prohibited on the river.

Launched in September 2016, Scenic Aura is arguably the most sophisticated vessel on the Irrawaddy, carrying a maximum of 44 passengers with an almost one-to-one ratio of staff to guests.

Each of if its 22 cabins – ranging in size from an ample 24 square metres to a 70-square-metre Royal Panorama Suite featuring its own private terrace and jacuzzi – boasts a river view, an alcove converting into a outdoor balcony with a touch of a button.

In terms of luxury, Scenic Aura's cabins rival any five-star hotel room, with Egyptian cotton linen, fluffy robes, a complimentary minibar that's restocked daily, Wi-Fi (admittedly a little sketchy on the more remote stretches of the river) and the services of a butler, who will even clean your shoes (without asking) when you return from a shore excursion.

A small plunge pool surrounded by day beds and swinging lounges is a godsend in the heat of day, while every morning I take advantage of an always-deserted fitness centre in an ill-fated attempt to ward off the side-effects of the  all-inclusive food and wine policy.

Because – oh my – the food! It's fair to say that no one ever goes hungry on a cruise; but Scenic's offerings are a veritable feast, with delicious meals a constant temptation. Sumptuous buffets include both Western and Burmese dishes, with the local chefs keen to share their traditional cuisine.

The ever-smiling Chef Htet Aung entertains select guests at a Chef's Table teppanyaki experience, his exemplary knife skills learnt at one of Myanmar's only Japanese restaurants and perfected by watching YouTube videos.

Complementing Scenic's all-day dining is an open bar, including an impressive selection of wines from Australia, New Zealand, South Africa and Chile. Although some of the bar staff are inexperienced – one bartender sweetly assures me that although he's never touched a drop of alcohol, his cocktails are the best he's ever tasted – the service is so charming and genuine, any minor errors are immediately forgiven.

All but one of Scenic Aura's crew are Burmese; only the hotel manager, Chantal, is internationally trained, hailing from St Lucia in the Caribbean. A job on a river cruise is highly covetable in Myanmar; and the staff's exemplary attitude to work and life is demonstrated through their warm smiles and graciousness.

Leading the charm stakes are our tour guides, two sisters who bicker, tease and support each other like the closest of siblings. Highly educated and outspoken, this pair aren't averse to initiating conversation about Myanmar's current  political situation.

Each shore excursion – usually conducted first thing in the morning before the heat sets in – is an education for passengers, with sightseeing always combined with local interaction.

Rather than being annoying, these delightful young touts – who have learned excellent English in their enterprise – provide valuable commentary about their towns, acting as surrogate tour guides for a small tip.

Every day we are challenged to learn a new Burmese word or custom; in the colonial town of Thayetmyo, for instance, our guides challenge us with a shopping game, buying ingredients from the market. I am instructed to ask for "bay oo" – but each vendor I approach shakes her head, indicating that the ingredient is not available.

Finally, one woman nods conspiratorially, reaching under the table to produce a taro-like root vegetable. Victorious, I return to the group and proudly present my hideous-looking purchase – only to be told I have been sold "pay oo", rather than the duck egg I was supposed to buy. 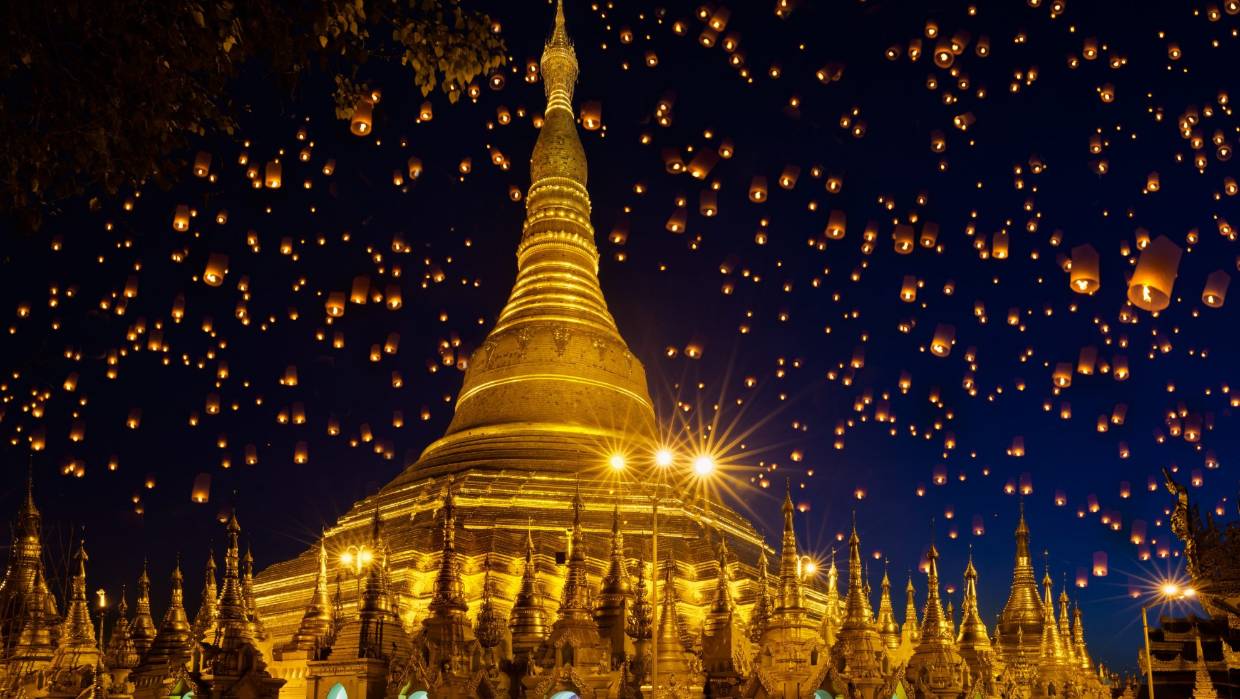 Shwedagon Pagoda during a lantern festival.

Pagodas of course, feature heavily on the itinerary; but there is usually an element of surprise to counter temple fatigue. In the village of Salay we stumble across a wedding ceremony, and are spontaneously invited to join the celebrations, while at the impressive Shwesandaw Pagoda in Pyay we luck upon a colourful and moving novice initiation procession – the proudest moment in every Buddhist boy's life.

Surrounded by their extended families, the aspirants, dressed as princes in resplendent silk robes and wearing gaudy make-up, perch nervously on makeshift thrones, and are carried around the pagoda on the shoulders of relatives.

They are then transferred onto horse- or elephant-back at the base of the temple, continuing on to the monastery where the most solemn part of the initiation ceremony takes place – the shaving of the head and donning of robes.

We rise before dawn one day to silently offer alms at a monastery; while in the town of Sagaing, we are treated to song, dance and high fives from 200 children – many of them orphans or victims of civil war – at a monastic school, who seem to garner as much joy from the occasion as we do.

Like the sacred banyan trees that cling to the banks of the Irrawaddy, Myanmar resists eroding forces, sending out roots that anchor, embrace and enrich. In spite of its difficulties, its poverty, a shocking plastic pollution problem and a difficult political situation, this is a country that gets beneath your skin; the wow factor may not hit immediately, but instead seeps into your consciousness, fuelled by the warmth of its people. 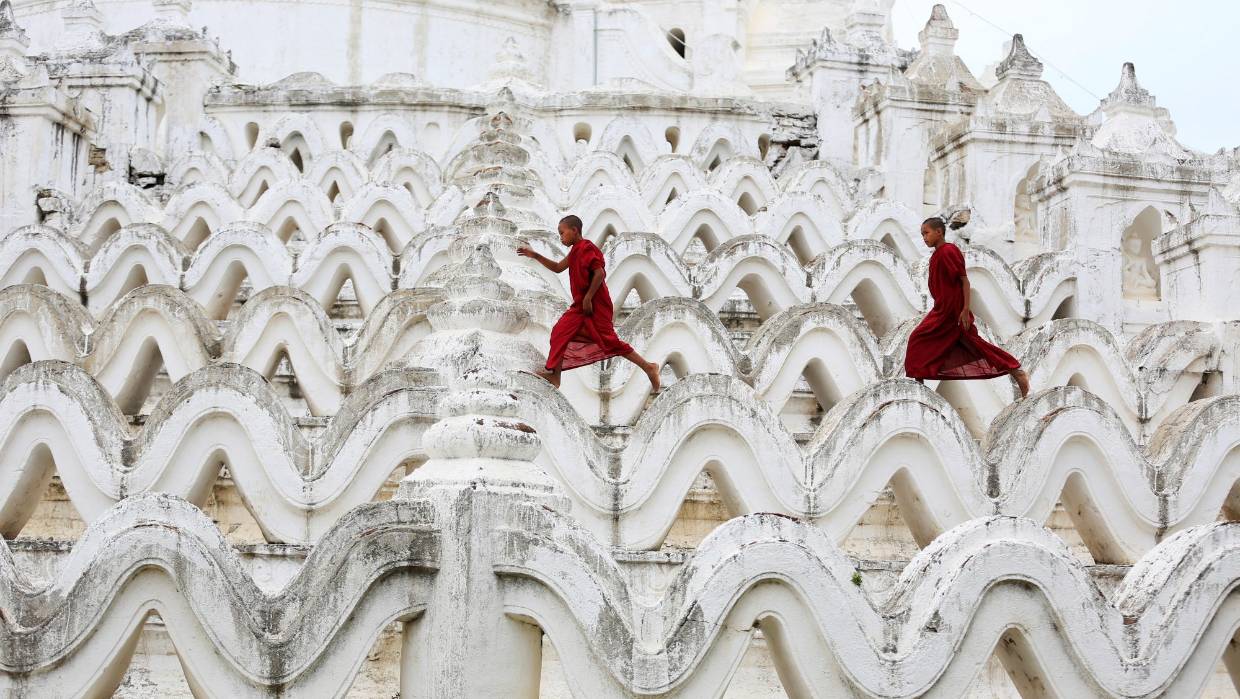 And at the heart of this compelling country is the Irrawaddy, the name of which in Burmese (Ayeyarwady Myit) is sometimes translated as "river that brings blessings to its people". The blessings are ours to share as well.