Portugal’s Douro River, winding 130 miles from the city of Porto on the Atlantic coast to the border of Spain, is a remarkable stretch of water. The former rapids have been tamed by a series of five giant dams and the topography is ever-changing. Between the various green hues of olive and almond trees, the views range from pastoral sheep and cattle farms to massive, colorful vineyards climbing in neat rows from the waterline to hundreds of yards high to narrow passages with giant boulders and steep, rocky cliffs on either side.

Currently there are 22 river cruise ships from several companies that ply the tranquil waters of the Douro from Porto. No one does it better than Scenic, the Australian-owned river cruise company that’s active on all the major European waterways. Our ship, the Scenic Azure, held just 96 guests, at least a dozen fewer than the competition. The ship’s General Manager, Jean-Paul Oliveira, said that Scenic always tries to set the standard for quality. “Our rooms are bigger,” he told us “and we can pay more attention to the needs of our guests. There are no extra costs. Everything is done for them.” Included in the fare are all airport transfers, meals, snacks, wine, bar drinks, tours, laundry and gratuities. For a luxury touch, every suite has the services of a butler.

All suites, except six on the lower deck, have full length, full width picture windows that lower at the touch of a button. The innovative balcony is actually part of the room, making the area seem more spacious. At night, another button lowers the room-darkening shade. The king size bed is totally adjustable with electric switches to move the mattress up and down. The bathroom includes a large shower enclosure with a half dozen nozzle choices and locations. High end L’Occitane soap, lotion, shampoo and conditioner are standard. 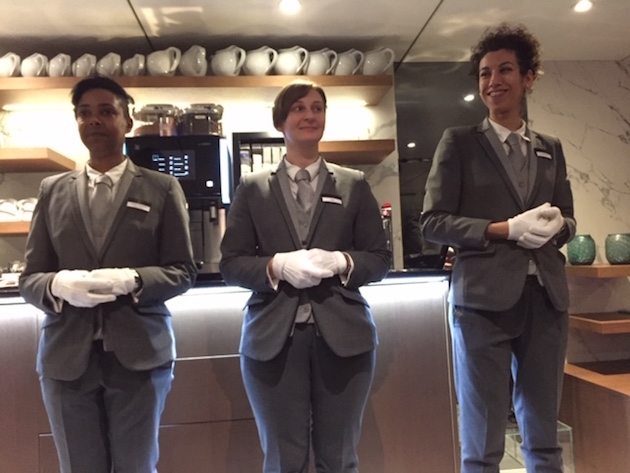 The butlers are introduced. The clever balcony and huge windows.

Dining was a special treat on Scenic Azure. Crystal, the main dining room, has open seating with tables for two to eight guests. Breakfast and lunch were buffet-style (with some specialty items available at lunch, including fresh grilled sardines) but dinner was full service with an extensive menu of Continental and Portuguese dishes. The beef, lamb and pork dishes were superb. Early in the cruise, the fish was not as good as it should have been but, towards the end of the week, the chef told us he changed his supplier. Major improvement!

The wines at lunch and dinner were especially good. Seeing all the vineyards along the Douro made us crave local vintages…and the ship delivered. Every evening the sommelier on board chose some wonderful white, red and rosé vintages, all very tasty and ideal for the cuisine. As expected, the selection of Port Wine was extensive with ruby, tawny and late bottles vintage all available. One afternoon the chefs offered a tasting combo of port wine and chocolate truffles. Decadent! 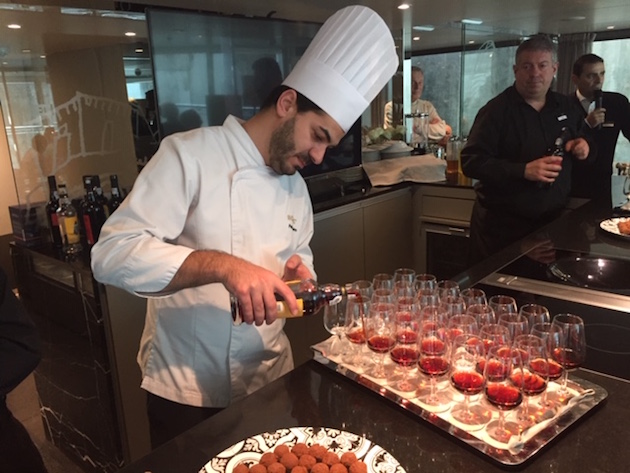 Every guest could book an evening at Portobello’s, where the front of the main lounge was turned into an excellent specialty restaurant with unique Portuguese fare and appropriate wines. For Diamond Level guests (Deck 3) an even fancier dinner, called Table D’Or, was offered. Limited to ten guests at a time, two chefs created an exquisite tasting menu with some of the best Douro wines and port. White glove service was provided by the three staff butlers. The Port highlight was a 2010 Ferreira Late Bottled Vintage. Rich, ultra-smooth and fragrant.

The outstanding onboard experience was matched by the scenery and by the excellent tours. Going through the five locks was a unique experience for many guests. One of the dams we traversed had a 115 feet water difference, the highest in Europe.

Onboard activities included Portuguese tile painting (the fired tiles were returned at the end of the cruise) and the pastry chef demonstrated how to make the unique and decadent Portuguese Custard Tarts. But the main attraction was the Douro River Valley itself (a UNESCO World Heritage Site) and the art, history and culture of its communities.

First stop was Regua, a lively riverside town of 17,000, and its excellent Douro Museum, focusing mainly on the historic Port wine trade. Wine production in the region goes back 2000 years but the name “Port” was not recognized until the late 1600s.

The next day a trio of Scenic buses took guests to the early 18th Century Baroque masterpiece, Mateus Palace. The famous rosé wine, no longer made there, is named for this opulent property with its intricately carved wood ceilings and beautifully sculptured gardens.

Photograph: The Wall of Port at the Douro Museum. 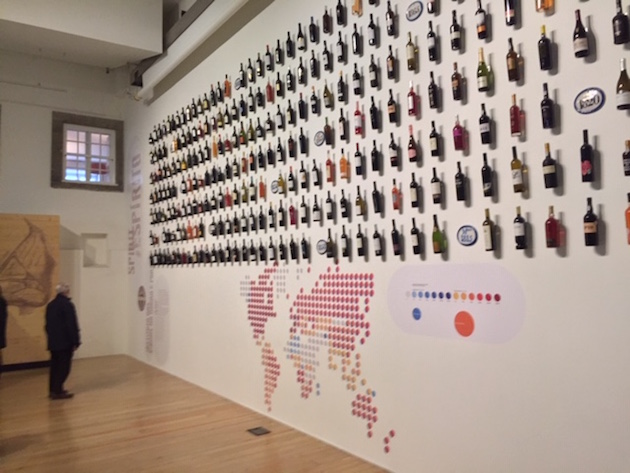 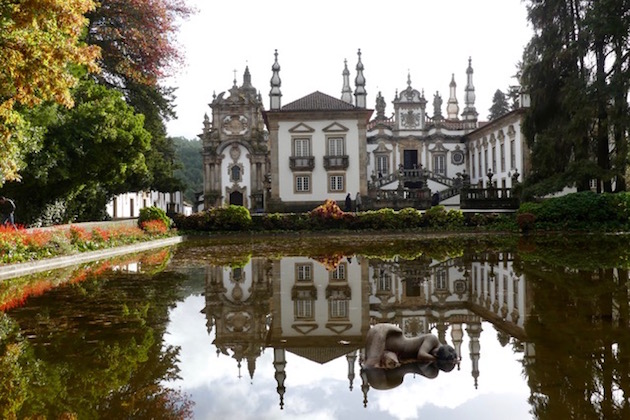 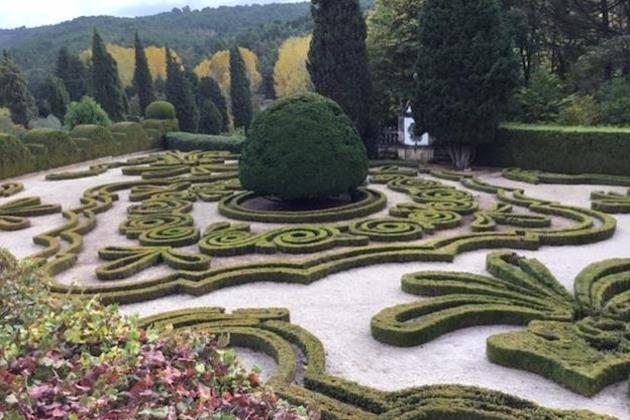 The gardens at Mateus Palace. 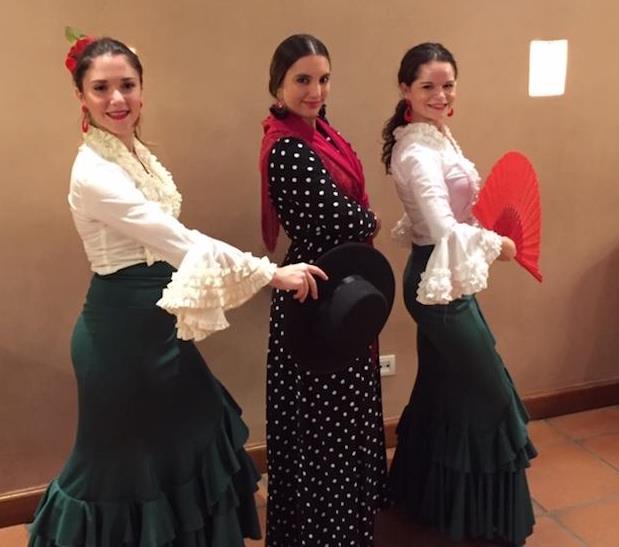 The last Portuguese village on the Douro is Barca D’Alva where the Scenic Azure had to dock because the Spanish portion of the river lacks locks on its hydro dams. Again, the comfortable Scenic buses took us for an almost two hour ride to the remarkable Spanish city of Salamanca, population 150,000, dating back to the pre-ancient Rome period (Hannibal laid siege to the city in 220 BC).

Heading downriver again towards Porto, we stopped at the Portuguese village of Pocinho where three tours were offered – the Coa Valley Museum, a kayak adventure or, our choice, a gourmet almond experience at the Casa Palnova Estate, a 1652 manor house that also produces olive oil and port wine. We were shown how local almonds are opened with small hammers, then how they are roasted in sugar syrup and covered with cinnamon, orange or ginger flavour. Lots of samples!

The next day we all took the Scenic buses for a hair-raising climb along narrow, switchback roads to the village of Provesende, a tiny town with stone houses, narrow streets and cobblestone roads. In its heyday it was filled with opulent manor houses, many of which have fallen into ruin, It’s quiet, almost ghostly (a 1573 pillory stands in the town square) but there’s activity at the Paderia Fatima bakery where 200 round loaves are produced daily in an ancient looking, wood-fired oven. In the barn-like basement of a 1680 manor house we were treated to port wine and bolo fresh bread (filled with meat) while surrounded by wine barrels, two of which were car size. It truly was a step back in time.

Back in Porto, our Scenic guides took us to the 14th Century Sao Francisco Church with its glowing altar covered with 600 kilograms of gold, for a special evening concert of traditional Fado. Called “The Soul of Portuguese Music”, Fado is haunting and melodic, often mournful. We were treated to Fado by both a female and a male singer, accompanied by two guitars. 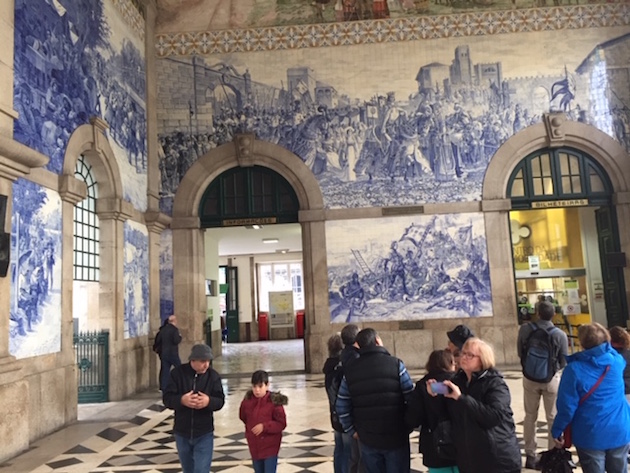 The highlight of our final day in Porto was the remarkable Sao Bento railway station. The vestibule is covered with more that 20,000 blue and white Azulejo tiles, depicting scenes of Portuguese history and transportation.

With fewer than 100 guests on the Scenic Azure (a friendly mix of Brits, Australians, Canadians and Americans), it was easy to get to know fellow travelers. Karen Maher of Scottsdale, Arizona, was on her first ever cruise with her sister. “Portugal kind of spoke to us,” she said. “I loved the activities but wish I’d done even more research on the towns and villages we visited. This was a great starter cruise for me.”

At the other end of the travel spectrum we met Mike and Margaret Metcalfe of Yorkshire, England. They have now completed 90 ocean and 21 river cruises! They travel this way because, “We unpack once and see lots of different places. This Douro cruise is by far the best way to see the scenery of Portugal.” They added that too many people have opinions about cruising without trying it. “There’s something for everyone on ocean and river cruises. But frankly, we prefer smaller ships like this one.”