An Introduction to Indian Classical Dance

Colorful, enchanting and entrenched in local folklore and tradition - India's classic dance forms sit at the heart of the country's vibrant culture.

Music, dance and folk performance are among the pillars of local cultural traditions in India. From Tamil Nadu in the south to Uttar Pradesh in the north, each of India’s historic provinces cultivates a rich culture of dance and music – with distinct styles of classical dance passed down through the generations.

Wherever you travel across India, you’ll encounter dance, music and art at every turn. Performances of traditional dance are commonplace in all major Indian provinces, and local people are fiercely proud of their colorful, ancient cultural traditions.

During a luxury escorted tour in India with Scenic, you’ll have the chance to witness the extravaganza of Indian classical dance as part of a handful of exclusive performances and events. So, to help give you a sense of what you can expect from such a showcase of culture and music, here we’re exploring eight of the most wonderful forms of classical dance to see on your visit to India. The origins of Manipuri dancing can be traced back to ancient times, to the isolated state of Manipur, northwest India. Here, inspired by the sacred dance forms of Shiva and Parvati, a unique cultural routine developed, and Manipuri dancing has since been a cornerstone of the region’s frequent religious festivals and rituals.

Manipuri is, without doubt, one of India’s most storied and fascinating classical dance forms. Focusing prominently on the separation of Gopi and Radha from Krishna, the dance incorporates a number of forms, including Ras, Sankirtana and Thang-Ta, each of which has a multitude of different steps and movements. The ‘Thang-Ta’ portion of the routine, performed exclusively by men, is more akin to martial arts, and reflects the idea that Manipuri men were, traditionally at least, expected to defend their home and community from rival tribes and wild animals. 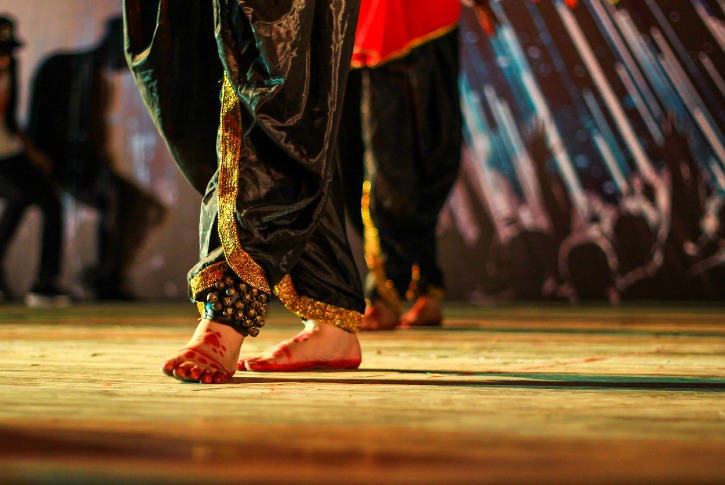 The oldest and most widespread form of classical Indian dance; Bharatanatyam originated among the Hindu temples of Tamil Nadu, to the southeast of the Indian peninsula. Believed to date back to the 4th century BC, the dance form is best associated with the Devadasi culture – an ancient tribe of women who served as courtesans and performers in Tamil Nadu’s great temples.

Today, Bharatanatyam is most often performed by a solo female performer, as is tradition. The repertoire of the dance can be divided into three categories, including ‘Nritta’, ‘Nritya’ and ‘Natya’, with each encompassing different steps, speeds and patterns. With dancers performing in traditional Tamil Hindu bridalwear – including a colorful sari and leather belts for hanging jewelry – a performance of Bharatanatyam is a colorful, vibrant spectacle.

Originating among the traveling Kathakar – ‘storytellers’ – of northern India, the Kathak dance form is steeped in North Indian folklore, and today considered among the most popular of all India’s classical dances. The form’s steps, hand gestures, costumes and body-art all reflect different aspects of ancient Indian mythology, lending greater charm, color and historical intrigue to the performance.

Kathak dancing has been around for thousands of years, beginning among the Kathakar nomads of northern India and rising to the courts of the Mughal Empire. Though the popularity of the dance declined during India’s colonial rule, it has since revived, with Kathak dance troupes now among the most popular of all cultural performers, particularly in the northern provinces. Its costumes encompassing both Hindu and Muslim traditions, the Kathak promises an exciting, toe-tapping performance. 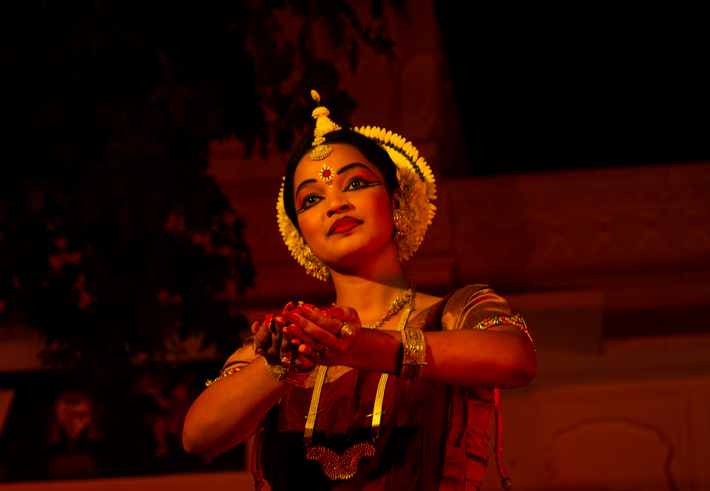 Based on archaeological evidence, Odissi is considered the oldest form of classical folk dancing in India. Findings place the origins of the dance at the Hindu temples of Odisha, on India’s spectacular eastern seaboard, where it is thought to have been performed since at least 500 BC.

The theoretical background of Odissi dancing is well documented in the ancient Sanskrit text, while its steps, forms and unique hand gestures are found inscribed on the sculptures and murals of Odisha’s Hindu temples and shrines. Odissi routines are based on mythical stories, devotional poems, and spiritual messages from Hindu texts, with dancers relying on ‘abhinaya’ expressions and ‘mudras’ gestures to the convey meaning. In the Odisha region, Odissi is today performed by a handful of religious factions, including Hinduism, Buddhism and Jainism. With its colorful costumes, story-driven narrative and elegant steps, Kathakali is among India’s most distinctive classical dance routines. Hailing from the state of Kerala, the dance focuses on retellings of India’s great folk epics, with every element of the performance – from the elaborate costumes to the face paintings – inspired by Kerala’s ancient ancestors, culture and folklore.

One of the most distinctive aspects of Kathakali dance is the costumes and makeup which the performers wear during the routine. Tradition dictates that there are five types of ‘Vesham’ makeup worn by Kathakali dancers, including Pacha, Kathi, Thadi, Kari and Minukku. These different looks, which include ornamental headgear and lavish face paint, are intended to represent different characters within the story, including heroes, villains, demons and female characters, known as sages.

The origins of Kuchipudi dancing, like so many forms of classical Indian dance, are rooted in ancient Hindu texts – chiefly the ‘Natya Shastra’, which is associated with the Krishna district of Andhra Pradesh. Early forms of this text, scribed in copper and found in the region’s ancient temples, describe a type of dance and cultural performance entrenched in the teachings of the Hindu faith, which were carried throughout India centuries ago by the country’s beloved traveling bards.

Mirroring the structure of Bharatanatyam, Kuchipudi also incorporates the repertoire of ‘Nritta’, ‘Nritya’ and ‘Natya’. Here, ‘Nritta’ is the paciest, most technical part of the dance, while ‘Nritya’ is more concerned with story, the dancers using their body to communicate the narrative. Meanwhile, the ‘Natya’ part of the Kuchipudi routine is normally performed by a group, with elements of dance and movement bringing the dance to a vibrant conclusion. Alongside Kathakali, Mohiniyattam is a classic dance form of Kerala, which, like a handful of other traditional cultural dances, is documented in the ancient Sanskrit Hindu text of ‘Natya Shastra’. However, unlike Kathakali, Mohiniyattam is widely considered a much more feminine type of dance, with gentle steps, graceful body gestures, and lightly-colored costumes designed to impart a sense of peace.

Mohiniyattam follows the Lasya form of dancing, with a solo female performer producing light, graceful steps with musical accompaniment. Expressive gestures and hand motions touch on a simple narrative, with themes of peace, harmony and tranquility. Dancers almost always wear a white or slightly off-white sari, embellished with gold jewelry, as well as a face of brightly-colored makeup, which is designed to make her expressions more visible. 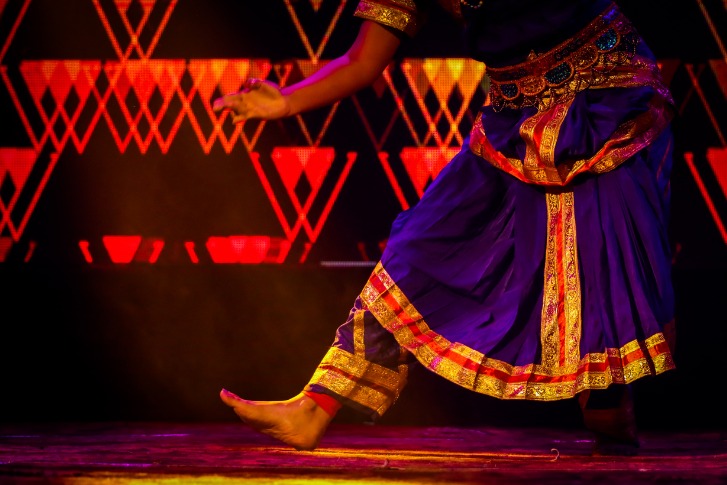 Introduced in the 15th century, Sattriya dancing came about through Vaishnava, the patron saint and cultural reformer of Assam, a state in northeast India. Cultivated and kept alive through the centuries by Assam’s Satras Vaishnava monasteries, Sattriya is today among the most distinctive dance forms in India, drawing on the ancient folk rituals of Ojapali and Devadasi to create a dance that’s unique to the Assamese region.

A performance of Sattriya dance is based on the strict rituals of ‘hastamudras’, or steps, and ‘acharyas’, which covers music. Drums and cymbals provide the primary musical accompaniment to the Sattriya performance, with dancers guided by a repertoire which incorporate steps from both the Ojapali and Devadasi schools of dance. Rhythmic, expressive and visual, a Sattriya performance is a must on your visit to the beautiful Indian region of Assam.

Enchanted by the heritage, traditions and beauty of India’s classical dance forms? Join Scenic for a luxury escorted tour through India and Asia and experience the beauty of regional dance as part of a handful of exclusive Scenic Enrich and Scenic Freechoice events. For more information or to book your place, visit the homepage or call us on 0808 271 3471.