Trace the Pacific Ring of Fire from Alaska to Chukotka, south along Kamchatka Peninsula, to the Kuril Islands. Delight in spectacular landscapes forged by plate tectonics, punctuated by active volcanoes capped with ice and swathed in tundra, taiga and exquisite forests.
In Chukotka, cruise magnificent fjords to some of the world’s most remote wilderness where Chukchi reindeer herders roam. Enjoy walks to stunning alpine lakes and across colorful tundra, feasting on crowberries, bilberries and exquisite cloudberries, and Zodiac cruise to soaring bird cliffs, where bears and foxes scavenge for eggs.
Kamchatka boasts more than 120 volcanoes, many active, with hot springs for soaking and rivers replete with spawning salmon that sustain brown bears, Steller’s sea eagles and Koryak fishermen keen to share their songs, dance and food with us.

Just off Kamchatka Peninsula discover the Commander Islands, an extension of Alaska’s Aleutian chain, and remote Nikolskoye, Russia’s only Aleut settlement. Considered the ‘South Georgia of the North Pacific’, Commander Islands host vast colonies of Steller sea lions, northern fur seals and seabirds including cormorants, puffins and red-legged kittiwakes. Land on Bering Island and visit the grave of Vitus Bering, renowned Danish explorer who, while in Russia’s service, proved Asia and North America weren’t connected while mapping some of Alaska’s coast.
In the Kuril Islands, detect an air of intrigue as your Discovery Team historian reveals abandoned listening posts and submarine bases, Soviet era fish processing plants and Japanese WW II fortresses. Hike through megaherb forests, visit the remains of Ainu villages and delight in close encounters with largha (spotted) and harbour seals, and sea otters swimming with pups on their chests. Zodiac cruise, kayak and stand-up paddle board in waters aflutter with whiskered auks, puffins, guillemots and kittiwakes as you traverse one of the world’s greatest bird migration flyways.

Kunashir, the most southern Kuril Island, is less than 12 miles away from Hokkaido, Japan’s most northern, yet a world away in population size, culture and experience. Embark Scenic Eclipse for your Discovery Voyage departing Otaru, the bustling seaport of Sapporo, to explore Japan’s west coast on A Journey Through Time. From Western-style architecture marking bygone days in Hakodate, to the incredible archaeological dig of Sannai Maruyama, the largest and best preserved from the Jomon era (13,000-300 BC); visit Maizuru, Kyoto’s port on the Sea of Japan that is dedicated to Admiral Togo, who destroyed much of the Russian fleet in a single battle.

Sail to South Korea for a relaxing day in Busan, with its urban beaches and delicious street food culture. Returning to Japan, visit one of the few remaining castles from the Edo Period (1603-1867) at Uwajima, and walk in the Peace Memorial park of Hiroshima.

By contrast, the Natural Wonders of Japan voyage explores Japan’s east coast, features Shingu, home to UNESCO World Heritage-listed sites, including one of the three Kumano Sanzan Shrines connected by Kumano Kodo pilgrimage routes; Tokyo, the world’s most populous and arguably most exciting city; and the most pristine wildlife habitats in Japan. From Kushiro, home to the country’s largest marsh and the red-crowned crane, to Nemura, with its 300 species of wild birds and Rishiri Island’s virgin forests, alpine flowers and wild, spotted seals.

Whether you choose to experience the wonders of Chukotka, Kamchatka (including the Commander Islands), the Kuril Islands or the coast of Japan, or combine them all in one fantastic exploration of the Pacific Ring of Fire, you’ll finish with memories you’ll treasure forever. 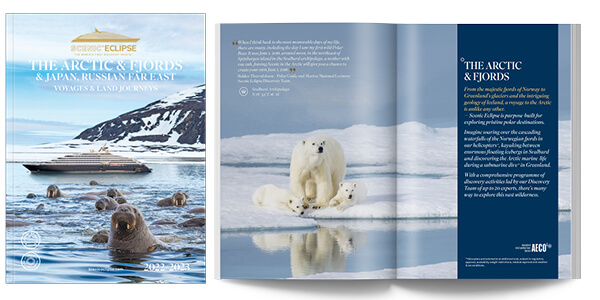