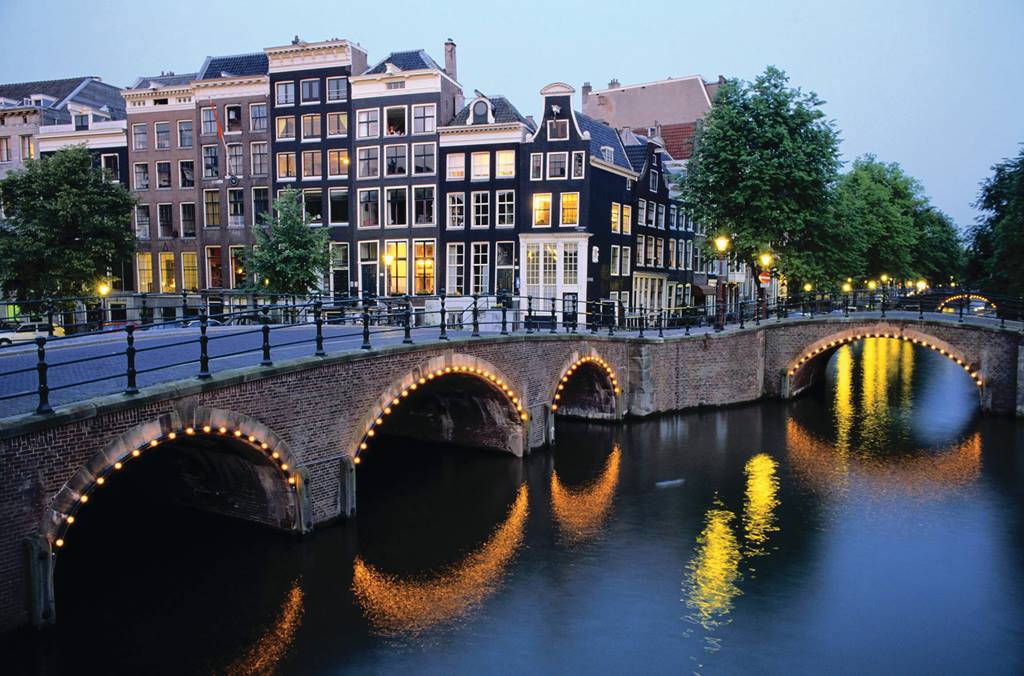 The city of Amsterdam welcomes about 20 million visitors each year, and its reputation as a friendly, culturally diverse metropolis continues to elevate Amsterdam river cruise stops up the ranks of our international itineraries. After all, more than 85 percent of the city’s residents speak at least two languages. That, by itself, is inviting. Amsterdam also boasts the largest number of nationalities out of any city in the world; and while the specific number varies slightly from report to report, it is safe to say that the total number exceeds 175. Of course, Amsterdam’s diversity often gets overshadowed by the city’s infamous Red Light District, as well as its notorious coffee shops that don’t serve coffee—more on this later—but to the city’s residents, those two features are not considered blemishes, nor are they catalysts for crime.  In fact, in Amsterdam, river cruise guests will be happy to know that the city ranks among the 25 safest in the world.

Despite being the largest city in the Netherlands, as well as the country’s capital, Amsterdam is unique in that it is not home to any of the buildings that house the Dutch government—those are based about 37 miles southwest in The Hague. The city is also unique for the fact that the majority of it is built below sea level. In fact, at its lowest point Amsterdam sits almost 22 feet below the ocean line. Oddly enough, Amsterdam is also home to more bicycles than residents, as getting around on two wheels proves to be the most effective and popular means of transportation within the city.

While the quirks and idiosyncrasies of the city add to its charm and strengthen the element of discovery that defines a European river cruise  through Amsterdam, those factors are not what attract those 20 million visitors each year. Instead, curious world travelers journey to Amsterdam for its storied past, the uniqueness of its architecture and layout, and its vast blend of ethnicities, which manifests itself in a variety of ways—from restaurants, bars, and cafes to museums, nightclubs, and everything in between.
Order a FREE River Cruising Brochure!

The Humble Beginnings of an International City

Historians have not ruled out the possibility that at some point during the Roman Empire’s reign, a settlement could have existed at the mouth of the Amstel River. However, because the remains of such a stronghold have never been found, the earliest record of Amsterdam’s history dates to the 13th century, when settlers built a modest fishing village. First written accounts referencing the city can be found in a manuscript from 1275, although it was three decades before the city was granted a full charter.

In the centuries that followed, Amsterdam grew exponentially and matured into a trading center, though its evolution was largely influenced by the controlling monarchies that ruled the Netherlands during the 16th century. Once the territory passed into the hands of the Spanish monarchy, a religious and political uprising began to take root, fighting back against Spain’s oppressive rule in the region. Amsterdam eventually joined in that effort. Shortly thereafter, Spain captured Antwerp, which was then the leading port for the Netherlands. Once Dutch forces countered by blockading the Antwerp’s only access to the ocean, Amsterdam flourished as a major city, largely due to an influx of Protestant refugees. Amsterdam’s population tripled between 1565 and 1618, and the city quickly became a hub of shipbuilding and banking. In fact, Amsterdam is home to the world’s oldest stock exchange, which was founded in 1602, almost two centuries before the London Stock Exchange was established.

Today, much of this history is on display in the city center, including the Old Church (Oude Kerk), which was built during the 13th century and is the city’s oldest building. River cruise guests in Amsterdam can also tour the New Church (Nieuwe Kerk)—built two centuries later—that sits adjacent to the Palladian-style Royal Palace, which began its life as Amsterdam’s city hall during the 17th century. As the city grew, so did its network of canals. Today, those canals, along with the city’s unique neighborhoods, architecture, and building methods, help to distinguish Amsterdam from all other European river cruise destinations.

A City on Stilts Below Sea Level

It was during Amsterdam’s Golden Age (1580 – 1670) when the city really came into its own. As it grew, so did its network of roads and, more significantly, its canals. During the 17th century, more than 60 miles of canals were formed. In fact, the canal ring inside the Singelgracht, which was built during the 17th century, was declared a World Heritage Site in 2010. In total, Amsterdam is home to 165 individual canals, which has earned it the nickname “Venice of the North.” Venice, by comparison, is made up of 177 canals. However, Amsterdam trumps its Italian counterpart with 1,281 bridges (872 more than Venice), 80 of which can be found in Amsterdam’s city center.

The city’s many waterways serve as a reminder that Amsterdam is built on soggy, unstable soil. For centuries structures were built upon a collection of long wooden posts, some as long as 65 feet, that extend through about three dozen feet of mud and silt and are secured into the firmer soil beneath it. It is estimated that Amsterdam is built on approximately 11 million of these wooden poles. (Concrete supports have since replaced wooden posts in the city’s new construction.) Most residences are built upon 10 posts, though larger structures require significantly more. The city’s Centraal railway station, for example, is supported by almost 9,000 posts, while the Royal Palace in Dam Square is built on more than 13,500 of them.  Almost 7,000 structures that were built during the 16th, 17th, and 18th centuries still stand, although many are now pitched or tilted due to the slight instability of the ground upon which they are built.

Unlike every other European capital city, Amsterdam is unique for the fact that all of the country’s governmental buildings, with the exception of the Royal Palace, are based in The Hague. Even then, the Dutch royal family only occasionally resides in that palace. This shift in the location of the Netherlands’ political offices means that Amsterdam is without the monumental architecture, statues, and expansive squares that attract millions of tourists in other cities. Instead, it’s the narrow, bustling streets of Amsterdam’s old town—and its canals—that draw visitors to the city.

Some estimates suggest that during the Golden Age, a period of time when Dutch painters were considered the world’s best artists, about 5 million paintings were created. What’s more, it is believed that during this era, every Dutch home was accented by at least one painting on display. Today, the most significant paintings in Dutch history are on display in a variety of museums throughout the city. In fact, Amsterdam features more museums per square meter than any other city in the world, even Paris.

Windmills, Tulips and Belgian Delights with Keukenhof
Amsterdam to Amsterdam
Experience Dutch sights and Belgian delights as you cruise the canals of Amsterdam and cycle through the village of Hoorn.
Offers Available
Fly Free inc taxes
Conditions apply
8 day
From (USD)
$ 4,195
Discover

Rhine Christmas Markets with Switzerland
Zurich to Amsterdam
Travel in luxury from Zurich to Amsterdam on this 12-day cruise and tour. Take in the highlights of the Rhine & Switzerland including Lucerne, Montreux & Strasbourg.
Offers Available
Save $1,500 per couple Earlybird fare per couple
Conditions apply
12 day
From (USD)
$ 5,060
Discover