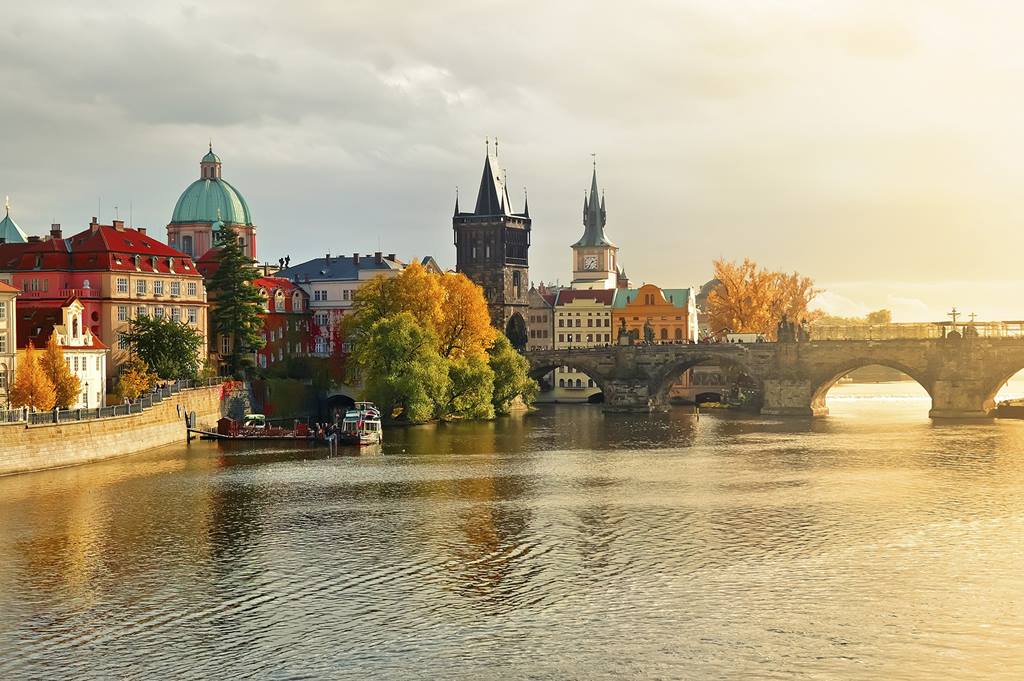 From its early and humble beginnings as a cluster of small riverside settlements, Prague has matured into a culturally diverse, 192-square-mile metropolitan city that is spread out over the hills and along one of the most important river valleys in the Czech Republic. More than 6 million tourists visit the “City of a Hundred Spires,” so named for the multitude of church towers that punctuate the city’s skyline, and Prague continues to be a well-loved stop on many of our European river cruise itineraries.

Many visitors make the trip to Prague to explore its narrow streets, visit its Baroque palaces, and discover its well-preserved ancient squares and Old Town neighborhoods. But as you’ll find during a Prague river cruise with Scenic, there is much more to see and do in this breathtaking city.

Prague through the Centuries

The earliest known settlement of what is now Prague can be traced to the accounts of merchant Ibrahim Ibn Jakub, who wrote of a castle that was built on a hillside along the right-hand bank of the Vltava River. A second castle, known as Hradčany, was soon erected slightly downstream and on the opposite side of the river (more on this castle later). By 1085, the city was home to the first Bohemian king, Vratislav I; and once a stone bridge was built over the river in 1170, the city began to expand and develop quickly, though it initially grew as a collection of individual boroughs. By 1348, Prague was home to the first university in Central Europe; and in 1583, the city was appointed the capital of the Habsburg Monarchy (a rank that it would hold for almost three decades).

Over the subsequent centuries, Prague continued to grow—its population doubled from 40,000 to more than 80,000 people between 1705 and 1771—yet it wasn’t until 1784 that its four boroughs (Old Town, New Town, Malá Strana, and AnchorHradčany) were unified. During the Industrial Revolution Prague expanded further, and with the rise of the working class and strong national sentiment, a resentment of the ruling Austrian monarchy grew stronger. Eventually, Czechoslovakia earned its independence in 1918, though it fell under Nazi rule during World War II and four decades of Communism following a Soviet “liberation” effort during the late 1940s. Finally, in 1989, a peaceful rebellion against Communism, known as the Velvet Revolution, led to the founding of a democratic Czech Republic four years later. Today, Prague is entrenched as a major cultural center in Europe, and a highlight of many Scenic river cruise adventures.

River Cruising Through Prague
[No textFor many Prague river cruise guests, the fascination and intrigue at the heart of a visit centers around the varied architectural styles that have melded together over the centuries—there are at least a dozen prominent styles throughout Prague, all of which have been preserved and are celebrated by the city’s inhabitants. That being said, there are four attractions that all visitors should see during their time spent in Prague. Such a tour begins with Old Town Square, which is home to numerous styles of architecture, though the Gothic style is most prominently on display thanks to the Church of Our Lady before Tyn’s 262-foot-high towers. From early December to early January, Prague’s Old Town Square features the Czech Republic’s largest Christmas Markets (a central feature of many of our Prague river cruise itineraries), which recreate the ambiance of the markets that defined a way of life during medieval times. Old Town Square also features Kinský Palace, which houses the Czech National Gallery art museum; the Old Town Hall, which is complete with a tower that offers panoramic views of the city’s Old Town neighborhood; and Prague Orloj, a medieval astronomical clock, which is noteworthy enough to be the second of Prague’s four major attractions.  in field]

The clock, which is the world’s third-oldest astronomical clock and the oldest still-operating example, is mounted on the southern wall of the Old Town Hall. Built by Mikuláš of Kadaň in 1410, the clock’s main function was to replicate the movement of the celestial bodies, most notably the sun and the moon. (Ironically, presenting the current time was less of a concern.) The clock’s astronomical dial is a type of mechanical astrolabe—a medieval astronomy device that functions around the once-believed notion that the earth was the center of the universe. Every hour on the hour, from 9 a.m. to 9 p.m., a procession of 12 wooden statues of the apostles appear from the sides of the clock, as well as a statue of death that strikes the time. The clock has been severely damaged—and subsequently repaired—several times over the centuries, no more than during World War II. Following the war, high-quality carving wood was in short supply, yet Czechs from around the country helped to replenish the supply necessary to carve replacement statues of the apostles. Those original figurines are now on display in the Prague City Museum; the statues that adorn the piece of horological history mounted on Old Town Hall are replicas that were carved in 1976.

The Most Famous Bridge In Prague
As its name might suggest, the Charles Bridge was commissioned by King Charles IV in 1357 and completed in 1402. In fact, some stories suggest that it was the Holy Roman Emperor King Charles, himself, who laid the first stone in the bridge’s construction. The Bohemian sandstone bridge is the most famous in Prague, and features almost 1,700 feet of cobblestone as well as 16 arches and 30 Baroque statues of religious figures. Like the astronomical clock, the bridge’s original statues are preserved and on display in the nearby National Museum; which means the statues that adorn the bridge today are all replicas. The pedestrian bridge attracts hundreds of thousands of visitors every year—some sightseers, others painters—who all vie for a prime spot to take in the splendor of the Vltava River. For centuries, the bridge was an essential structure in the city, as it was the only way to cross the river and it also connected the city’s Old Town area with Prague Castle.No text in field]

Measuring more than 750,000 square feet, Prague Castle (also known as Hradcany Castle), which was built during the 9th century, earns the distinction of being the world’s largest castle. The entire complex spans 18 acres and features numerous courtyards, as well as ancillary buildings that include St. Vitus Cathedral and St. George Basilica. Over its history, the castle has served as the seat of power for Bohemian kings and Holy Roman emperors; and in 1918, when the Czech Republic was established, the castle became the official residence of the nation’s president. The castle also remains the home of the Bohemian Crown Jewels, which are safely tucked away in a hidden room within the castle’s walls.

Prague Castle is unique in that it features structures that represent almost every architectural style of the city, everything from Romanesque and Gothic to Baroque and classicism. Prague river cruise guests who marvel at the castle’s lit façade once the sun goes down might need to thank the Rolling Stones. The British rock band played a concert in the city shortly after the overthrow of Communism in 1989 and they were awed by the castle but disappointed that it couldn’t be seen at night. So Mic Jagger and company donated a $32,000 lighting system and had their lighting designer install it.

Bohemian Sojourn & Oberammergau
Prague to Munich
Over 7 days travel from Prague to Munich and explore the rich histroy and stunning architecture. In Oberammergau, attend a performance of the epic play.
7 day
From (USD)
$ 4,195
Discover

Christmas Markets with Prague
Prague to Amsterdam
Soak up the Christmas atmosphere of Europe on an 18 day river cruise from Prague to Amsterdam. Discover the cities of Europe and delight in their charm.
Offers Available
Fly Free inc taxes
Conditions apply
18 day
From (USD)
$ 7,895
Discover

Jewels of Europe with Prague
Amsterdam to Prague
On this 18 day luxury cruise from Amsterdam to Prague, be enchanted by Europe's most beautiful cities including Nuremburg, Vienna, Salzburg and Dürnstein.
Offers Available
Save $3,000 per couple Earlybird fare per couple
Conditions apply
18 day
From (USD)
$ 6,895
Discover

Jewels of Europe with Paris & Prague
Paris to Prague
Explore the wondrous cities of Amsterdam, Cologne, Vienna and more on a 21 day journey from Paris to Prague. See the Rhine Gorge, Marksburg Castle and more.
Offers Available
Save $3,000 per couple Earlybird fare per couple
Conditions apply
21 day
From (USD)
$ 8,745
Discover

Christmas Markets with Prague & Paris
Prague to Paris
Enjoy the delights of Christmas with a 21 day cruise from Prague to Paris. Visit the Christmas markets and savour the atmosphere, traditions & delicacies.
Offers Available
Save $3,000 per couple Earlybird fare per couple
Conditions apply
21 day
From (USD)
$ 8,865
Discover

Christmas & New Year with Paris & Prague
Paris to Prague
The Christmas markets along the Danube are an incredible sight. Experience them with a 21 day luxury cruise from Paris to Prague.
Offers Available
Fly Free inc taxes
Conditions apply
21 day
From (USD)
$ 10,445
Discover