The Volga River is the largest running river in all of Europe. It starts northwest of Moscow and flows into the Caspian Sea some 3,500 kilometres to the south. It is also the main waterway Scenic Space-Ships follow on our Russian river cruises.
Our Russian river cruise starts on the Volga River in St. Petersburg, where guests are given five days to explore all the wonders of this majestic city. Considered the country's cultural heart, St. Petersburg holds stunning architecture and historical landmarks, including St. Isaac’s Cathedral, the Yusupov Palace, Catherine’s Palace, and the Hermitage Museum and Winter Palace.
Moving along the Volga River, our Scenic river cruise arrives on Kizhi Island, a historic site that has an impressive open air museum with over 87 wooden constructions. Its Church of Transfiguration building is the island’s most famous building, and is regarded as one of the best examples of wooden architecture in the world.
The Volga River guides our Space-Ship into Goritsy and Yaroslavl, medieval cities located in the heart of Northern Russia. Visit the Kirillo Belozersky monastery in Goritsy and sightsee Yaroslavl, the oldest city in Russia, before stopping in the city of Uglich.
Uglich lies directly on the Volga river banks and is.part of the Golden Ring of ancient towns surrounding Moscow. It is also one of the hubs of the Russian Orthodox Church, holding 23 churches and 3 monasteries in a city of only 35,000
As the Volga River cascades further south past Uglich, Moscow’s famous cityline can be seen arriving alongside the river banks. Scenic guests have a full five days to sightsee the capital city of Russia. Take in the finest sights, which include the State Tretyakov museum, Red Square, Saint Basil’s Cathedral and the Kremlin. As our Space-Ship takes a small tour of the Moskva River, guests will be able to get a panoramic view of Moscow’s historic sights from the comfort of their Space-Ship.
Using the Volga River as our river cruise’s waterway allows us to curate a custom, one-of-a-kind holiday for our guests. It flows perfectly through the most idyllic and historic landmarks of Russia and gives Scenic guests a beautiful glimpse behind the veil of a country that has stayed wrapped in mystery and intrigue for centuries.

Like the country itself, Russian culture is impressively vast. With rich architectural wonders, colourful folklore and tales of a turbulent past, there is much to discover in this enigmatic and fascinating country.

From the might and grandeur of Moscow to the nostalgia of Mandrogi, the Volga meanders through Russia’s cultural heart — introducing you to many of the country’s most memorable highlights.

Start your enriching voyage in the city of St. Petersburg, and pay a visit to the city’s historic gems — Catherine’s Palace, St. Isaac’s Cathedral and Yusupov Palace to name but a few. Or, make straight for the Hermitage, former home to the Tsars of Russia and now one of the world’s most distinguished art galleries.

Next, stroll the banks of the Volga in the ancient city of Yaroslavl, gazing upon architectural treasures that have stood since the 11th century. Then, it’s on to Moscow, Russia’s fabled capital, renowned for its imposing Red Square and the beautiful St Basil’s Cathedral.

With historic wonders around every bend, a luxury Volga river cruise showcases Russian culture in all its splendour. 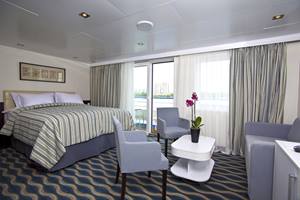 Cruise the Volga in Luxury and Style

Unique and boutique, Scenic Tsar serves as a luxury floating hotel during an unforgettable Volga river cruise. Accommodating just 112 guests, this Space-Ship offers intimacy in abundance, and benefits from the incomparable service found on every Space-Ship in the Scenic fleet.

From the opulence of the Neva Lounge to the perfectly proportioned cabins; every inch of the Scenic Tsar has been carefully considered to offer unprecedented levels of luxury on this fascinating waterway. Guests can relax in the comfort of their own generously-appointed suite, the majority of which comprise a balcony, or else venture to one of the public lounge and dining areas to talk over the day’s adventures with newfound friends. Then, of course, there’s the Sun Deck, where you can relax and enjoy the serene views as the banks of the Volga drift gently by.

From complimentary Wi-Fi to evening entertainment, we’ve thought of everything to make your journey on the Volga River extra special.

Jewels of Russia
St Petersburg to Moscow
From the haunting beauty of St. Petersburg to the might & splendour of Moscow, discover Russia on a 15 day river cruise on board the luxurious Scenic Tsar.
Offers Available
Save $3,000 per couple Earlybird fare per couple
Conditions apply
15 day
From (USD)
$ 6,095
Discover

Jewels of Russia with Berlin & the Baltic States
Berlin to Moscow
Berlin is the perfect gateway for your 27 day adventure into the Baltic States of Estonia, Latvia & Lithuania, before you cruise the Volga river in Russia.
27 day
From (USD)
$ 12,745
Discover