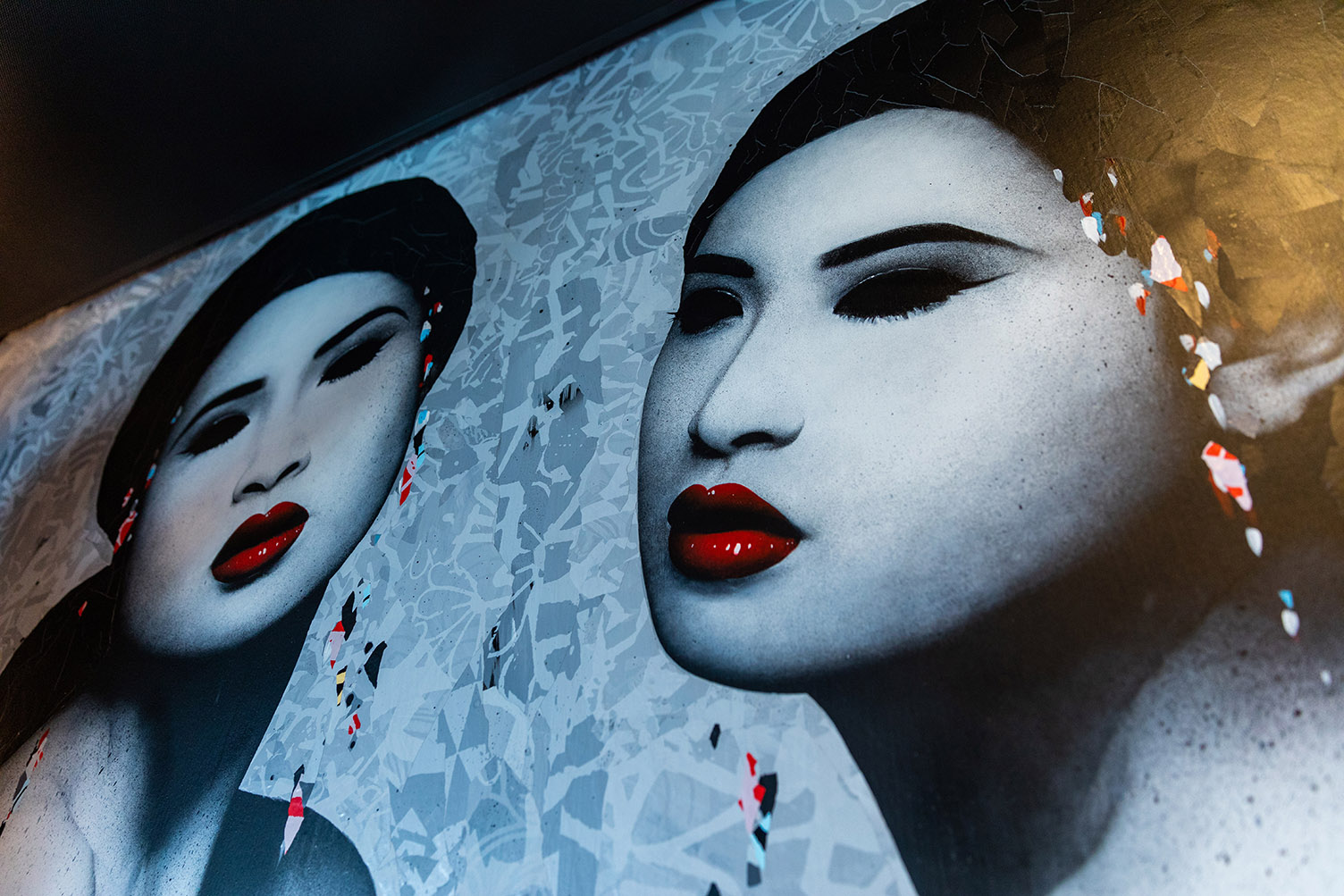 An Installation of graffiti onboard Scenic Eclipse

Scenic Luxury Cruises and Tours has unveiled three custom installations on board Scenic Eclipse by the famous British Graffiti Artist, Carl Hush. The works were installed over a two-day period while Scenic Eclipse was in port in Rotterdam.

“His unique works are striking, an amalgamation of collage, graffiti, stencil, painting and drawing. He is known for using these mixed techniques to create his geisha inspired works. The collection on board Scenic Eclipse will be of his beautiful geisha ladies, featured most prominently in our stunning Koko’s restaurant”, said Karen Moroney, Project Director- Design, Scenic Group. “His work which focuses on the female from depicting their beauty and sensuality are created in traditional colours and modern graffiti style, which are the perfect complement to the warmth and subdued atmosphere of our ship design”, she said.

UK based artist Hush draws influence from graphic novels, animation and the evanescent quality of street art. Hush's mix of crazy anime inspired characters and pop-infused imagery creates a fascinating commentary on urban culture and has been described as Urban Abstract Pop.

Hush originally trained as a graphic designer and illustrator at Newcastle School of Art and Design for 5 years. His love of street art goes back to his youth, when he did a bit of graffiti in his formative years and made posters for rave/dance nights, "I've always been interested in how graffiti was being reintroduced and how it was influencing styles and fonts, but never really being accepted as its own art form".

Hush has worked throughout Asia, Europe and the USA. His interest and immersion in diverse cultures has informed his art which is recognizable for its cross-cultural influences. His central focus is the female form, in particular iconic and Pop Art renditions, from the geisha to anime manga. He is also interested in the contrasts between old and new and the fusion of Eastern and Western culture. Hush's technique combines various street art approaches with traditional art practices.

Scenic Eclipse has set a new benchmark in luxury expedition ocean cruising suites with 114 luxurious suites across five decks, a sumptuous 550m2 spa sanctuary, up to 10 dining experiences, butler service to every suite, a staff to guest ratio of up 1:1, and our two on board helicopters and a submarine offering truly unique discovery experiences.

Scenic Luxury Cruises & Tours has grown over its 33-year history to include award-winning, all-inclusive river cruises and handcrafted land tours that take participants to many of the world’s most fascinating destinations. Since 2008, Scenic has offered river cruises in Europe, SE Asia, Russia and Egypt on its 15 Space-Ships. Sister brand Emerald Waterways has seven Star-Ships offering European river sailings with an eighth (Emerald Harmony) launching this year for SE Asia’s Mekong River.