Dine Like a Local: 9 Dishes to Try in Bordeaux

From chocolat to foie gras, oysters to les guinettes – Bordeaux is indulgent French food at its finest.

Bonjour and welcome to Bordeaux, where gourmet discoveries await. At the heart of the Garonne and Dordogne basin, this exemplary French city is a veritable culinary yardstick, its fine food and fresh produce cherished across the globe.

Wine may come at the top of your to-do list in Bordeaux, but overlook the region’s celebrated plates at your peril. Surrounded by rustic, fertile lands and a stone’s throw from the Atlantic, Bordeaux has some of the finest, no-nonsense food in all of France. To inspire your upcoming trip to southwest France, here we explore nine of Bordeaux’s celebrated dishes, so you can dine like a local and experience the authentic flavors of the region.

From Arcachon oysters to indulgent foie gras, appetizers are a memorable event in Bordeaux. Discover a selection of the region's foremost small plates below.

The oysters of Arcachon Bay are internationally renowned for their delicate, sweet flesh, which makes them the perfect accompaniment to a glass of Semillon. Savored since Roman times, Arcachon oysters are now farmed extensively on the Atlantic Coast, with four distinct areas offering subtle variances in flavor, including Le Banc d’Arguin, Le Cap Ferret, Le Grand Banc, and L’Île aux Oiseaux.

Oysters are beloved throughout the Bordeaux region, and are traditionally served with lemon, buttered rye and a glass of local white wine. At Arcachon Bay, many of the 26 oyster farms open their wharves for tastings, allowing visitors to sample their catch direct from the waterfront.

Join Scenic on our Beautiful Bordeaux river cruise, and sample the exquisite flavors of Arcachon from the comfort of your luxury Space-Ship. Foie gras is among a group of regional delicacies rooted in France’s culinary heritage. Translating as ‘fat liver’, it’s a type of pâté produced through the process of corn feeding ducks and geese, and is known for its rich, buttery taste.

It’s thought that foie gras originated in Ancient Egypt, but today, the dish is cemented in the gastronomic traditions of the Dordogne. Much of France’s foie gras is produced in the Périgord region, whose woody, fertile lands create the ideal environment for flavorful poultry, pâté, and game. You’ll find foie gras throughout Bordeaux, both in specialty produce stores and on bistro menus throughout the city. The delicacy is often served as an indulgent hors oeuvre, though it can also be used as a garnish for rich meat dishes. 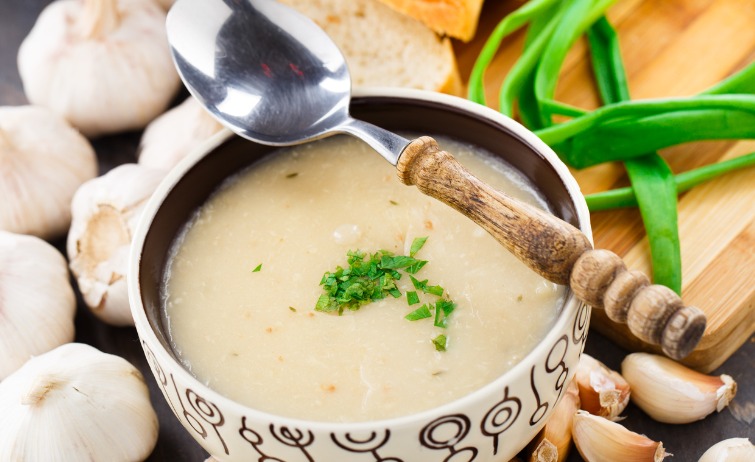 If you’d prefer a lighter appetizer as not to spoil your entrée, try tourin, a regional soup comprising garlic, egg white and fresh herbs. This light, nutritious broth derives from Dordogne, and is believed to bring a wealth of health benefits through its unique blend of garlic and mineral water.

While tourin originated in Bordeaux’s rural backwaters, the dish is popular throughout much of southern France, with several regional twists on the classic recipe. In Dordogne, fresh garlic takes center stage, with up to 10 cloves to every bowlful. Here, the soup is so well-known it has its own festival, with chefs from across Gironde competing to discover the region’s best tourin.

Enjoy local tourin at any of Bordeaux’s prized bistros, where a little red wine is traditionally added to the bottom of the bowl to enhance the flavor – a practice called ‘chabròl’.

For rich, hearty French food, there’s no place like Bordeaux. The region’s lush woodlands and fertile riverbanks cultivate produce intense in flavor, while time-honored culinary traditions toe the line between fine dining and peasant fare. Take a look at some of Bordeaux’s mainstay plates below.

Once reserved solely for aristocracy, lamprey is now considered one of Bordeaux’s principal delicacies, with several recipes showcasing the fish at its best. Line-caught in the Gironde estuary, lamprey is at its best between December and May, when you can expect to see it on specials boards throughout the Bordeaux region.

Lamprey is a unique fish found in rivers and seas from the North Atlantic to the Mediterranean. Though it resembles an eel (and is often mistaken for such), it’s an ancient fish species whose evolution is thought to have begun over 500 million years ago.

One of the most popular ways of eating Gironde lamprey is à la Bordelaise, with the fish sectioned and stewed in a broth of leeks, onions, shallots, garlic, cured meat, fresh herbs, and red wine. Before serving, the dish is traditionally flambéed in a blend of Armagnac and fish blood, further enhancing its rich, complex flavor.

Few French dishes are as iconic as steak frites. No matter where you travel across the country, this beloved brasserie pairing will never be far away. But what differentiates one steak frites from another is the sauce which accompanies it – and Bordeaux’s regional variation takes some beating.

In southwest France, entrecôte is the steak of choice. A thin ribeye, it’s perfect for slicing and makes a great accompaniment to classic French fries. The cut is often served Bordelaise, with a rich sauce made from bone marrow that closely resembles gravy. In fine dining restaurants, a beurre manié (a blend of butter and flour) is often used to elevate the sauce, adding an extra layer of indulgence to round off the plate.

Red wine, beef stock, thyme, shallots and butter – this is how the Bordelais enjoy their steak. Served with a side of crisp fries, there’s no finer brasserie fare in the city.

The gastronomy of Bordeaux owes much to the forests and woodland dotting the Gironde landscape, providing the ideal environment for earthy, pastoral produce and game. Here, the migratory wood pigeon, known locally as palombes, is a specialty, and you’ll find it everywhere when the bird is in season.

The residents of Bordeaux certainly aren’t shy around sugar. From chocolat to patisserie, you’ll find near endless opportunities to sample local treats in and around the city, so make like a local and indulge your sweet tooth. An enduring symbol of Bordeaux’s collective sweet tooth, the cannelés is by far the most popular dessert in the city. Introduced in the late 17th century by nuns at the Couvert de L’Annociade, the cannelés is a vanilla-flavored pastry cake that’s drenched in rum and coated in butter, which helps give its classic dark brown color.

Cannelés take pride of place in the majority of patisseries throughout Bordeaux. Most variations are sweet, and often contain a filling of vanilla cream, though there are some savory versions which hark back to the recipe’s historic origins.

Crisp on the outside and soft in the middle, cannelés are delicious whether you’re eating one right on the street or as an accompaniment to a pick-me-up café au lait. 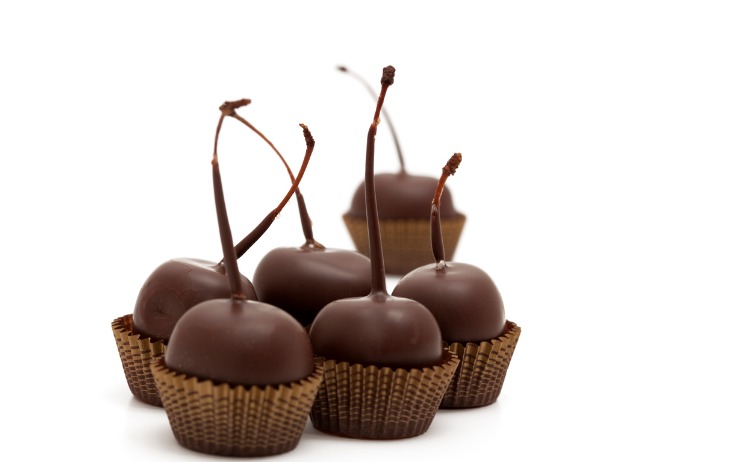 Bordeaux is famous for its chocolate, with several revered chocolatiers calling the city home, including La Maison Darricau and Hasnaâ Chocolats Grands Crus. Praline, ganache and madinina are popular chocolates in southwest France, but here in Bordeaux, les guinettes de chocolats is easily the best-loved variety of the bunch.

Les guinettes comprises a cherry, macerated in kirsch or Armagnac, and encased in smooth, rich dark chocolate. It was created right here in Bordeaux, and is today considered a luxury sweet delicacy that captures the city’s love of chocolate and its revered fresh produce.

One of the best places to track down les guinettes is in the Triangle d’Or district – a series of majestic streets in the heart of old Bordeaux. Here, you’ll stumble across several historic chocolatiers whose tempting window displays are impossible to pass by.

Macarons may be closely associated with Paris and its luxury patisseries, but the traditional almond macaron was born in Saint Émilion, in Nouvelle-Aquitaine. It’s thought that almond macarons were originally produced by the nuns of Ursuline’s Convent in the early 17th century, and their recipe has since been passed from generation to generation, resulting in the classic cookie beloved throughout Bordeaux today.

Unlike the colorful, two-stack macarons associated with Pierre Herme and Ladurée in Paris, Saint Émilion macarons are much closer to a cookie; almost like a flattened Italian amaretti. Their recipe is also much simpler – but no less delicious – comprising of almonds, egg whites, and sugar.

So, while Saint Émilion may be revered for its delicate white wines, the macaron is the region’s second favorite culinary export. Be sure to sample one over a café au lait on your visit to Bordeaux.

Inspired to visit Bordeaux and the beautiful landscapes of southwest France? Click here to discover our collection of luxury river cruises on the Garonne and Dordogne rivers, or call our team today on 855 430 4464 for more information.

Beautiful Bordeaux
Bordeaux to Bordeaux
Sample some of the region's best wines in iconic locations & enjoy a Scenic Enrich concert in Médoc on your 11-day luxury cruise.
Offers Available
Save $3,000 per couple Earlybird fare per couple
Conditions apply
11 day
From (USD)
$ 4,895
Discover

Flavours of Bordeaux
Bordeaux to Bordeaux
11 day
From (USD)
$ 7,495
Discover

Gems of the Seine & Beautiful Bordeaux
Paris to Bordeaux
Experience the best of France as you cruise along the Seine & through Bordeaux. Visit the wineries and vineyards on a 21 day journey from Paris to Bordeaux.
Offers Available
Save $6,000 per couple Earlybird fare per couple
Conditions apply
21 day
From (USD)
$ 10,245
Discover

Iconic France
Bordeaux to Lyon
Discover the beauty of France with a luxury Saône and Rhône river cruise from Bordeaux to Lyon. Visit destinations including the Blaye Region & Avignon.
Offers Available
Save $6,000 per couple Earlybird fare per couple
Conditions apply
21 day
From (USD)
$ 11,130
Discover

Beautiful Bordeaux & Unforgettable Douro
Bordeaux to Porto
Explore one of the world’s most celebrated culinary regions, Bordeaux & discover the hidden gem that is Portugal on a 21 day journey from Bordeaux to Porto.
Offers Available
Save $6,000 per couple Earlybird fare per couple
Conditions apply
21 day
From (USD)
$ 11,175
Discover