Bordeaux: A river cruise through one of the world's great wine regions 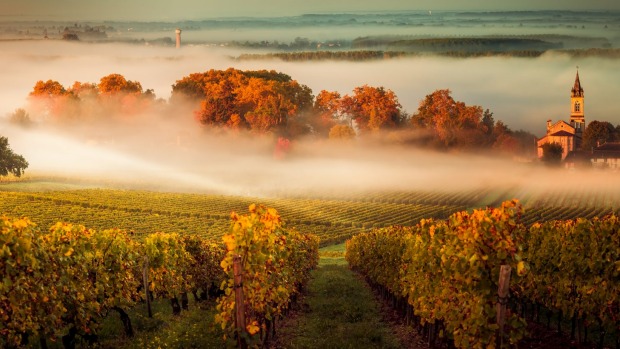 The wine region of Bordeaux, France

Ah, the great rivers of Bordeaux. The Dordogne, the Garonne, and the funnel-shaped estuary of the mighty Gironde. But then there are the rivers of another sort – the Merlot, the Cabernet Sauvignon, the Cabernet Franc, the Sauvignon Blanc, the Semillon and the Muscadelle.

If you like rivers – and you like wine – it seems only logical to blend the two on a river cruise in one of the world's great wine regions, waking up every morning to a town with a name you have only ever seen on a bottle.

There is an easy flow to a river cruise that's very different to being on the high seas; but that doesn't mean it isn't exciting, busy or, indeed, strenuous. You can tramp through vineyards on 12-kilometre hikes, cycle 30 kilometres of country roads on small but sophisticated e-bikes, and tour any number of enchanting chateaux and citadels, knowing you can collapse back on board each night for dinner, accompanied – but of course – by the wines of the region.

Or you can just sit on the rooftop deck with a glass of merlot as the setting sun lights up the water, and celebrate the fine art of doing nothing at all. 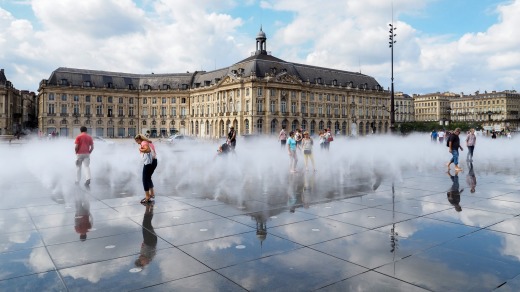 The City Built On Wine

The launching pad for the cruise is the city of Bordeaux, a city built on rivers of wine. Romans started planting vines here in the first century AD, and the city evolved as one of the world's great trading hubs, thanks to the waterways leading to the Atlantic and beyond.

Just 500 kilometres southwest of Paris (and a little over two hours by fast train), Bordeaux has undergone a remarkable transformation in recent years, with a multimillion-euro urban redevelopment driven by the city's mayor, former French prime minister Alain Juppe.

In the past 20 years, the once dark, grime-covered 18th-century buildings have been cleaned, major traffic-jammed streets pedestrianised, a sleek, silent tram network installed, and the river banks cleared to create a four-kilometre riverside park. It's a romantic city in which to wander and get lost.

And then there's the world's largest reflecting pool, the riverside Miroir d'Eau, designed to reflect the majestic symmetry of the Place de la Bourse opposite. The Miroir's constantly bubbling fountains and mists of vapour derive from water, however, and not from cabernet sauvignon. Seems like a missed opportunity, Monsieur Juppe.

The Story Of Wine

The bold, golden glass curves of Bordeaux's La Cite du Vin are designed to evoke that almost sacred moment when wine is swirled in a glass to release its aromas.

The massive, €80 million, interactive museum tells the story from the beginning – Georgia, Armenia, Egypt, and more recently (!), ancient Rome – proving that the history of wine-making runs parallel with that of civilisation itself. "The world of wine is bigger than Bordeaux, bigger than France", says museum director Philippe Massol.

A stop at the aroma bar is a must, where you can sniff your way through typical wine aromas such as leather and licorice. "Everything here is to help you experience the culture of wine," says Massol. The tour finishes, quite rightly, with a glass of wine in the rooftop bar.

How Sweet It Is

"Sauternes is not a dessert wine." Our personal guide at Chateau Guiraud in Sauternes wants to make that very clear. "Chateau Guiraud fits perfectly with duck, and with blue cheese such as Roquefort," she says. "It is especially good with spicy Sichuan food."

The vineyard of this Premier Cru Sauternes house covers just 66 hectares and produces one of the great wines of the world using strictly organic methods, with no artificial pesticides, fertilisers or herbicides. Its strategy involves the creation of "insect hotels" that attract an estimated 635 different species of insects, used to control vine predators. After the precise perfection of the grand chateaux we have visited, Guiraud feels revolutionary – natural, overgrown, radical, and very, very special. 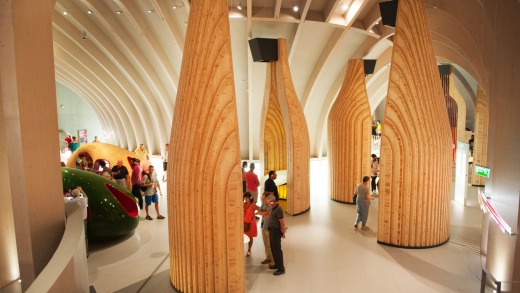 Our floating wine bar – sorry, cruise ship – is the sleek Scenic Diamond, completely refurbished in 2017 to allow generous public spaces for just 155 passengers. It's long (135 metres) and low, enabling it to glide under the historic stone bridges that arch across the Garonne, built by Napoleon to transport his troops.

Apart from the large, comfortable bar where daily briefing sessions are held by the redoubtable cruise director Tania Mirao, there are two dining rooms (with free seating), a salt therapy room, gym, spa and rooftop vitality pool. Cabins are cleverly designed with plenty of storage, excellent beds clad with Egyptian cotton, computer, balcony and fully stocked minibar. In fact, there's (all-inclusive) booze everywhere you turn, from Moet champagne at breakfast to espresso martinis at midnight. We're going to have to pace ourselves.

Going With The Flow

The Diamond is currently under the command of First Captain Sebastian Smith and Second Captain Graham Smith, a rare father and son team (son, Sebastian, being First Captain at the tender age of 25).

We head first to the market town of Libourne on the Dordogne, close to one of Bordeaux's most precious wine appellations, Saint-Emilion. The village of Saint-Emilion itself, with its half-buried church and merlot cuttings for sale in local shops, is the stuff of dreams.

The following day, we discover the 16th-century town of Pauillac, gateway to the richly endowed Haute Medoc appellation, then tootle past the tiny carralets, the rustic fishing huts that line the banks of the Garonne, to Cadillac, to explore Sauternes. Then it's back to Bordeaux for a day, and on to Bourg, jumping-off point for a memorable walking tour of the medieval town of Cognac and a trip to the immaculate, high-security Remy Martin cellars, vineyard and distillery.

Next stop is Blaye for a market tour with the chef in the shadow of the imposing 17th-century citadel, followed by a farewell dinner back on board as we return to Bordeaux. 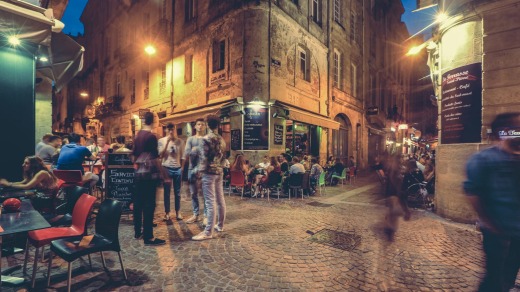 Downtown in the city of Bordeaux, France.

It's frightening how quickly one becomes accustomed to 11am wine tastings.

But when you're immersed in the fantasy land of the exquisite Chateau Gruaud Larose, for example, you're not going to knock back a taste of the 2003 vintage, magnificent in its earthy, spicy, herbal red-berriness.

Or say you're at the imposing Chateau de Cadillac in the Fronsac appellation, hearing about Australian entrepreneur Richard Serisier's great-great-grandfather Jean Emile Serisier, who left Bordeaux for Sydney in 1839 and planted 10,000 vines just outside Dubbo in western NSW. If he were to open a bottle of the supple, balanced, 2012 Le Bout de Monde (available here from Melbourne-based importers Bordeaux and Beyond, bordeauxandbeyond.com), then it would be rude to not dive in, right?

The Art Of Wine

We're gathered under a copse of ancient trees for a "sundowner" at the magnificent Chateau Siaurac, a 17th-century vineyard located between Pomerol and Saint-Emilion – with Petrus as next-door neighbour, no less.

After a curated tasting of three vintages and a delicious pâté de campagne, we watch as a young Italian-born artist paints a "portrait in wine". He dips his palette knife into a wine-glass of blood-red paint – made to a special formula using the chateau's own wine – and flicks it in long sweeping arcs over a large canvas. "I just use gravity, the wine does the rest," he says.

Under the soaring slate medieval turrets of Chateau d'Agassac in the Haut-Medoc, we are treated to caneles, Bordeaux's famously delicious little rum-scented caramelised cakes, and the lively classical repertoire of talented French string ensemble, the Varese Quartet. On the coach back to the Scenic Diamond, our indispensably charming local guide, Elisabeth Lafargue, has us singing an old UB40 hit that's close to her heart … Red, Red Wine.

Rivers Of Wine, Mountains of Food

On board, our breakfasts are of freshly baked French pastries and bacon cooked to three different levels of bacon crispness. Lunches are generous hot-and-cold spreads that often feature local cheeses and fruits from the day's market tours. Dinner is an ever-changing multi-course meal matched to regional wines. In between times, there are Scenic Culinaire cooking demonstrations and on-board tastings of sea-sweet oysters from nearby Arcachon, local cheeses and chocolates.

Head chef Angelo Attard is one of those young, ambitious chefs with such thorough training he can reel out garlicky snails, tender frog's legs rustic terrines, coq au vin, rich lobster thermidor and crepes suzette without blinking an eye. It's as if we are cruising through the very milestones of French regional cuisine itself.

Drinking It All In

Our fellow passengers are a lively bunch, with a high proportion of Australians hoping to extend their food and wine knowledge, and have a good time doing it – and to that end, it would be good to see more wine tastings and education on board.

But what's remarkable, as we move from river to estuary, north to south, and glass to glass, is how much we learn without even realising it. That cabernet is the heart of the Left Bank (think blackcurrant, blackberry, structure and elegance) and merlot is the star of the Right Bank (think raspberry, strawberry, roundness, softness). That you can almost smell the honeyed nectar in the air down south in the magical vineyards of Sauternes and Barsac. We learn, too, about the famous Napoleon III-inspired classifications of 1855 that drive the reputations and prices of Bordeaux wines to this day. You're not just drinking wine in Bordeaux, you're drinking history.

Eating Out In Bordeaux

Fresh oysters, goose confit, and sizzling entrecote steaks – you must be in Bordeaux. And with 7000 wine makers and 65 appellations in the region, there's no shortage wine to have with them.

Scenic has a range of special interest cruises from April to October 2019, inclusive of food, drinks, minibar, transfers, tips and exclusive Enrich, Freechoice and Tailormade excursions; from Beautiful Bordeaux (11 days, Bordeaux to Bordeaux, from $6695 a person), to Romantic Rhine and Moselle (15 days, Zurich to Amsterdam, from $7695 a person).
This story was written by Jill Dupleix and Terry Durack, who travelled as guests of Scenic.