The Many Sites Along The Rhine River

Europe is teeming with exceptional rivers that are worthy of your time and consideration as you plan a river cruise. The Rhine, for example, is one that deserves a placement at or near the top of your list. Although the river served as an important trade route during Roman times, it wasn’t until the Romantic period—from the late 18th century through the second half of the 19th century—that the Rhine became a popular tourism destination, attracting writers, artists, and wealthy world travelers who wanted to see and find inspiration from the river valley’s natural beauty.

There are many alluring destinations along the Rhine; however, the most significant may be the same Upper Middle Rhine Valley (including the Rhine Gorge) that attracted those writers, artists, and world travelers more than two centuries ago. Sixty small towns and villages dot the riverbanks throughout this 40-mile stretch of the river, as do picturesque vineyards and the protected—and still photogenic—ruins of about 40 castles and fortresses that were built on the valley’s hilltops over the course of about 1,000 years. For those reasons, a Rhine river cruise provides an ideal showcase of Germany’s storied medieval past. Castles Of The Rhine

Although there are more than three dozen castles that captivate those who sail through the Rhine’s upper middle valley, one particular stronghold, Marksburg Castle, is unique for being the only hilltop castle along the river that was never destroyed. Today, castle visitors can acquire firsthand knowledge of medieval fortresses, as most of the castle’s buildings date to the 13th, 14th, and 15th centuries. In fact, the castle’s kitchen, great hall, bedchamber, chapel, armory, wine cellar, and battlements provide visitors with a glimpse into life as it was lived during the Middle Ages.

In the years that immediately proceeded the Romantic period, wealthy entrepreneurs rebuilt many of the castles perched on hilltops overlooking the Rhine. Two of the most prominent and important are Rheinstein Castle and Reichenstein Castle. Originally built as a customs castle during the late 13th century, Rheinstein became the symbol of the 19th century’s castle reconstruction period and is now a protected World Heritage site. Visitors who tour the castle today will encounter suits of armor and knight-wielded weapons from the 15th century, not to mention a variety of artistic stained glass windows, some of which were made almost 700 years ago.

Similarly, a tour of Reichtenstein Castle, which was first built during the 11th century, allows visitors to walk through a library, music room, and the private chambers of the castle’s former residents, including a gallery that showcases numerous ancestral portraits. Additionally, guests will see 1,200 hunting trophies, a variety of antique weapons, 18th-century furniture, and ancient wine glasses from the Roman Empire. Visitors who venture up to the castle’s battlements will also be rewarded with stunning views of the Rhine.

Despite their popularity, ancient castles—rebuilt or still in ruins—are not the only captivating destinations to be seen and discovered during a Rhine river cruise.

Cruisers who sail down the Rhine as it forms the border between northeastern France and southwestern Germany can visit more than 100 wine-producing villages in Alsace, a French region strongly influenced by its German neighbors and famous throughout the world for its exceptional white wines. They can also take a bicycle into Strasbourg, which is home to the largest network of bike trails in France—more than 300 miles of trails wind their way through the city. 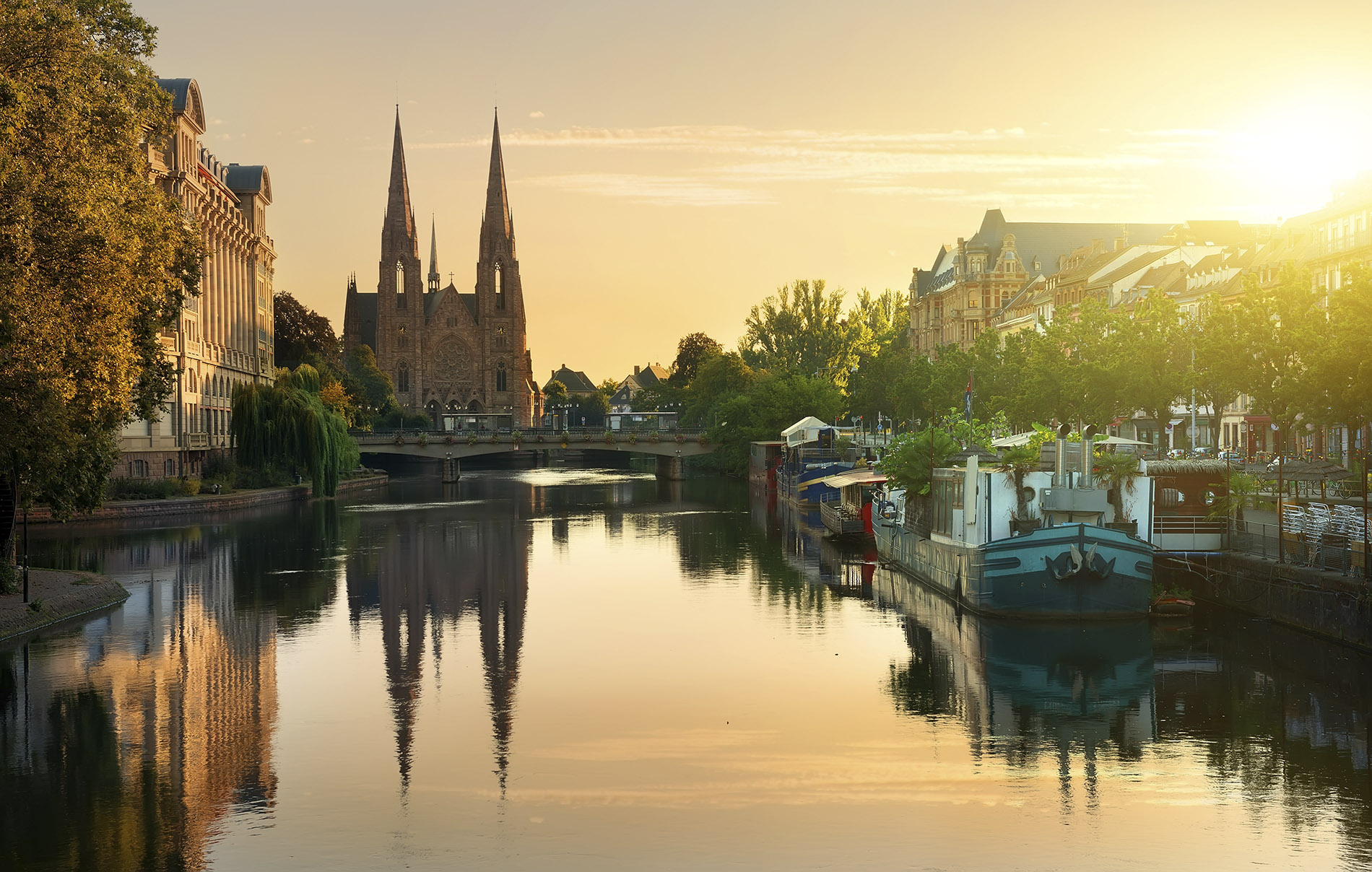 In Strasbourg, travelers will want to visit the cathedral of Notre-Dame, a Romanesque structure that dates to 1015 and is considered a masterpiece of Gothic art. With its 465-foot-tall spire, the cathedral was the tallest building in the Christian world up until the 19th century. Inside, it is still home to 12th- and 14th-century stained-glass windows, as well as a functioning Renaissance astronomical clock that utilizes a mechanism built in 1842.

Strasbourg visitors can also spend the day in The Petite France Quarter, the old town section of the city where the streets are level with the waterways. This historic (and protected) neighborhood was once home to fisherman, millers, and tanners, and it features half-timbered houses that were built during the 16th and 17th centuries. It is also home to distinctive winstubs—lounges or restaurant-bars that serve the region’s famous wines.

Farther to the north, the Rhine River meanders through Cologne, Germany’s fourth largest city, where travelers are presented with a broad range of sight-seeing destinations. River cruisers with an interest in architecture and religious history will want to visit Cologne Cathedral, a church that was first built during the 13th century but was significantly enhanced during the Romantic period. Those who visit the cathedral will want to trek up the 533 steps that lead to the south tower’s platform, which offers a stunning view of the city and the Rhine River. Similarly, guests will want to pay admission to the Cathedral treasury, where a variety of holy relics—some dating as far back as the 4th century—are on display.

Java lovers should schedule a trip to Café Reichard, a traditional coffee house and restaurant set in Cathedral Square that has served a variety of specialty coffees, pastries, and other fare for more than 150 years. Despite its longstanding history, the café is surprisingly large—it can seat 400 people inside and an additional 400 people on the outdoor terrace.

Other noteworthy destinations in Cologne include the Ludwig Museum, an institution that opened in 1989 and displays numerous pieces of contemporary art, including important 20th-century works by Andy Warhol; and the city’s Old Market, a historic town square that features a number of shops, restaurants, and bars, and is close to a variety of breweries specializing in the city’s Kölsch style of beer.

Of course, these are just a few of the many alluring destinations that can be seen and explored along the Rhine, a river that established its reputation during the Romantic period as a compelling attraction to visit all its own.

Book your suite today! Contact your Travel Advisor or call our Reservations Team at 855 430 4464.
Enquire Now