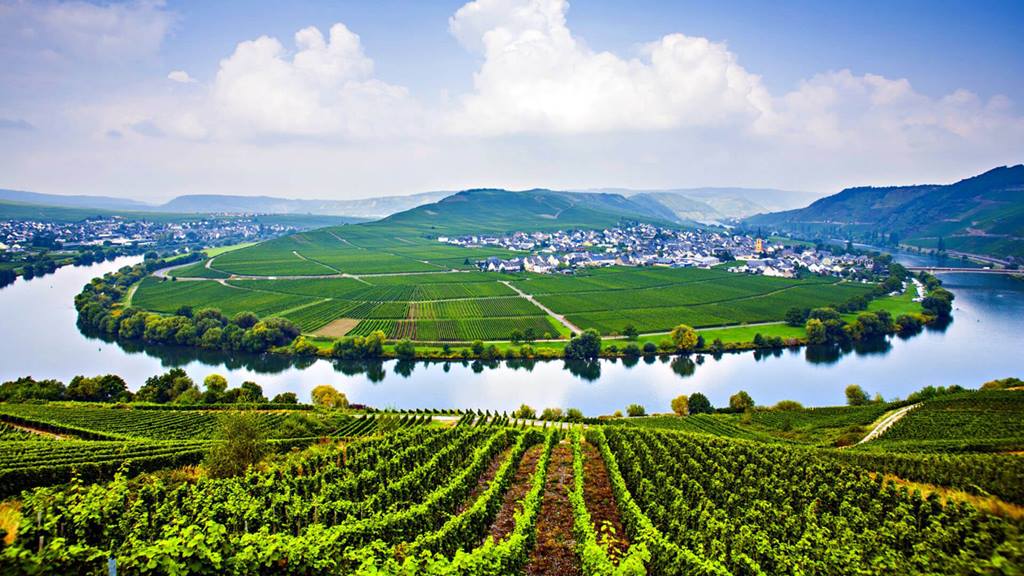 While the Rhine River garners most of the attention of travelers looking to experience Switzerland, Austria, France, and Germany via a luxury European river cruise, the Moselle River, a tributary of the Rhine, shines as a lesser-known jewel of Western Europe. For 339 miles, the Moselle flows down from the Vosges mountain range in northeastern France and continues its path through Luxembourg and western Germany before connecting with the Rhine at Koblenz. Along the way, the river flows gently past a handful of sleepy communes in France, some that are noted for their early 18th century stone ramparts and preserved Roman archaeology, others that are visited for their old town centers complete with basilicas and the ruins of medieval castles and mills.

After a brief stretch through Luxembourg—which is inevitable, given that the country covers less than 1,000 square miles—the Moselle flows through western Germany and a valley that has become famous for its vineyards and wine. The upper stretches of the river (above the French city of Metz) have been navigated by heavy barges since the 19th century; the 18-mile section of the river from Metz to Thionville has been navigated by those same vessels since 1932; while the Moselle Canal, which opened in 1964, now allows larger vessels to travel the almost 150-mile journey from Metz to Koblenz.

Our luxuriouse ships are among the vessels that have benefited from the opening of that canal; and our Moselle river cruises are replete with wonderful sightseeing opportunities and the chance to explore German towns and villages that look as if they have come alive from the pages of a fairytale.

The most notable of those fairytale towns is Cochem, a commune in Germany’s heralded Mosel wine region that is home to slightly more than 5,000 people. The town, which is teeming with medieval charm, gained city and market status during the 14th century, and that allowed it to grow into a prominent trade center. It wasn’t until the early 19th century that the town began to attract tourists, but by the 1930s, Cochem was well established as a popular tourist destination. Today, tourism and winemaking are the town’s two leading industries.

The town’s most visited attraction is Reichsburg Castle, the largest fortified hilltop castle of its kind on the Moselle River, which is believed to have been built around 1000 by a palatinate count. First mention of the castle in any written documentation can be traced back to 1051. During the reign of Archbishop Balduin during the first half of the 14th century, the castle was enlarged and also fortified; however, that fortification did little to stand in the way of King Louis XIV when French troops stormed the town and castle in 1688. Less than a year later, during the French occupation of Cochem, Reichsburg Castle was completely destroyed. It remained in ruins for more than 150 years, until a German aristocrat purchased the grounds and the castle ruins and rebuilt them in the then-popular Neo-Gothic style. Today, the castle is owned by the town of Cochem, though it remains furnished with Renaissance and Baroque pieces that were collected by the aristocrat and his family, who used the castle as a summer residence during the second half of the 19th century.

Moselle river cruise guests in Cochem are also attracted to Das Enderttor, also known as Endert gate tower. It is one of three existing gates that were built as part of the city’s early fortifications during medieval times. This particular gate operated as Cochem’s northern entrance and played a prominent role in preventing the town from being overtaken by foreign troops. According to legend, the townspeople learned of an impending attack one day in advance and, as a last line of defense, they stacked as many empty wine barrels in the square near the gate. When the invading soldiers forced their way through the gate, the townspeople sent all of the barrels rolling their way. Some of the attackers were injured and the invaders retreated, because they believed that all the empty wine barrels meant that the town had no wine barrels left.

Further along on a German river cruise, guests can wonder through the quaint, cobblestone streets of Bernkastel-Kues, stopping in the town’s medieval marketplace, which is still surrounded by 17th century timber-framed houses, although some have survived from centuries before. The town, which features steeply sloped vineyards growing primarily Riesling grapes, is well-known for its wine and has been for centuries. There is even a fountain in the town, Doctorbrunnen, which is adorned with scenes that recount an old legend about a locally made wine.
Also upriver from Cochem is the German city of Trier, which is built on the banks of the Moselle near the Luxembourg border. The city’s history dates back to the first century BC, and today visitors make their way to the city to tour its well-preserved Roman buildings, among them Porta Nigra, the best preserved Roman city gate north of the Alps; Constantine Basilica, which today is a Protestant church but was once 220-foot-long throne hall for Roman Emperor Constantine during the early 4th century; and the ruins of three Roman baths.
More about German River Cruises

Calling Luxembourg a petite European nation could be considered an exaggeration. After all, the country is more than 200 square miles smaller than the state of Rhode Island. Despite its miniature stature, however, Luxembourg encompasses a rich history. The nation was a founding member of the European Union; it enjoys a strong economy (it is home to the world’s highest GDP per capita); and given its central, landlocked location, Luxembourg has played a pivotal role in the rise and fall of various empires throughout European history. The nation is also the world’s last remaining grand duchy—a governmental system through which the head of the monarchy is either a grand duke or grand duchess.

On a Moselle river cruise, travelers visiting Luxembourg will want to tour the capital’s Old Quarters and Fortifications, which were declared a World Heritage site in 1994 due to their great historical significance. The fortified city was exponentially reinforced as it passed under the rule of the Holy Roman Emperors, then the House of Burgundy, followed by the Hapsburgs, the French and Spanish monarchies, and finally the Prussians. Until the dismantling of the city’s walls in 1867, Luxembourg City was one of the greatest fortified cities in all of Europe. The city’s most trafficked historical site is the Bock Casemates, a series of underground passages, including an archaeological crypt and a castle dungeon, which were all crucial to Luxembourg’s defense.

Every Scenic river cruise begins aboard one of the company’s boutique vessels or custom-built Space-Ships, so named for their spacious guest cabins, dining, and entertaining areas. Each of these four-deck Scenic Space-Ships includes numerous dining and sightseeing areas, as well as a lounge and bar area that offers panoramic views. Additionally, guests can soak up the rays at the top-deck swimming pool or retreat to the wellness center, which is equipped with a fitness area, beauty salon, and massage rooms. These ships are also noteworthy for their luxury suites, which are outfitted with sun lounges, 32-inch high-definition TVs, and complimentary wireless internet access.

Moselle River cruises take place aboard one of eight river cruise ships, each 443 feet in length and staffed with 53 crew members. These include Scenic Jasper, Scenic Opal, and Scenic Amber, which were built in 2015 and 2016, and can accommodate 85 cabins. Other ships include Scenic Crystal, Scenic Jewel, and Scenic Jade, which were built in 2012, 2103, and 2014, and can also accommodate 85 cabins. Finally, Scenic Ruby and Scenic Pearl are featured on our selection of  Danube river cruises. These ships were refit in 2013 and accommodate 84 cabins.

Vineyards & Vistas of the Rhine
Frankfurt to Zurich
8 day
From (USD)
$ 3,975
Discover

Rhine Highlights
Amsterdam to Basel
Starting out with a flourish in Amsterdam, and ending in Basel this is an itinerary that takes in the sweeping splendours of Europe.
Offers Available
Fly Free inc taxes
Conditions apply
8 day
From (USD)
$ 3,995
Discover

Charming Castles & Vineyards of the Rhine & Moselle with Switzerland
Frankfurt to Zurich
12 day
From (USD)
$ 6,775
Discover
Book your suite today! Contact your Travel Advisor or call our Reservations Team at 855 430 4464.
Enquire Now